The host of HLN's Crime & Justice tied the knot with her boyfriend of three years, Chris Haynor, at the Hermitage Club ski lodge in Wilmington, Vermont, on December 29

The host of HLN’s Crime & Justice tied the knot with her boyfriend of three years, Chris Haynor, at the Hermitage Club ski lodge in Wilmington, Vermont, on December 29. The wedding came as a surprise to most of the 50 guests, who thought they were assembling for Banfield’s 50th birthday party.

According to Banfield, she slipped away to change into her gown — and no one knew what was happening. At 5 p.m. local time that night, the wedding march began to play. Banfield, accompanied by her two sons, walked down the lodge’s grand staircase.

Haynor unzipped his ski jacket and was wearing a suit underneath. “When everyone realized what was happening, they started to cheer,” Banfield tells PEOPLE.

Banfield and Haynor met on Match.com in October 2014. They arranged a lunch date — but never got around to eating. “We just sat there in the restaurant talking for five hours,” Banfield laughs. “We never even ordered. We stayed until they asked us to leave.”

The couple headed to another restaurant for dinner. By the time the evening was over, “I knew I had found my soulmate,” she says.

This is the first marriage for Haynor. Banfield has two sons — Fischer, 12 and Ridley, 10 — from a previous marriage.

Banfield tells PEOPLE that she was not a bridezilla about the nuptials, saying, “I wanted this to be relaxed. I didn’t want to be stressed.”

After the ceremony, guests dined at the resort. Banfield took a hands-off approach to setting the menu. (When asked, Banfield can easily recall the mushroom bisque and the goronzola salad, but only that the beef and chicken entrees were “encrusted with something special. They were really good.”)

How was the food chosen? “I asked [the resort] what they do best,” she says. “I left the details to them. And it came out perfectly.”

For music, Banfield chose a New England-based band, The Short Bus. “They played until about midnight,” Banfield says. “They were just a fantastic band. I can’t even tell you how great they were.”

With the ceremony behind her, would Banfield change anything?

“Absolutely not,” she laughs. “Well, maybe the weather. It was like 25 below zero. But it was just a perfect night. I’m so happy.” 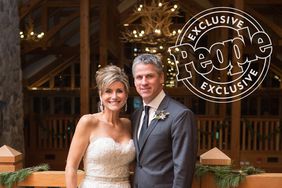 Inside Ashleigh Banfield's Surprise Wedding! How She Fooled 50 of Her Closest Friends