Heidi Klum is opening the doors to the America's Got Talent set.

The 48-year-old model took fans behind the scenes of the NBC talent competition when she gave PEOPLE (The TV Show!)'s special correspondent, Howie Mandel's daughter Jackelyn Shultz, a tour of her personal dressing room at the Pasadena Civic Auditorium in California.

"I mean, this is it," Klum said with a laugh, as she stood in the middle of the room. "The tour is very fast."

While the space may be small, it serves a mighty purpose for Klum, who's been a judge on the show for eight seasons.

AGT: All Season 16 Finalists Announced as Competition Narrows Down Lineup to 10 Acts

Pointing to a spot on the couch in her dressing room, she joked, "I remember this stain from at least five years ago. I hope it's makeup."

Elsewhere on the tour, Klum revealed that she keeps a makeup bag under the judges' table for touch-ups in between scenes. "I powder with Sofia [Vergara]. We love powdering," she shared.

Donning a yellow Elie Saab suit and "skyscraper" heels, Klum headed off to visit Vergara's dressing room next door, where she continued to discuss style with her fellow judge.

When Klum asked Vergara, 49, if she had changed her shoes, the Modern Family actress hilariously replied that she couldn't find ones that matched the height of the model's high heels.

"These are the highest one!" Vergara quipped, adding, "Don't talk to me without shoes."

As for backstage secrets, Klum teased that judge Simon Cowell has the competition's iconic red buzzer sound "turned up" during live shows.

"It is so loud," she told Shultz on the red carpet. "He's always like, 'Could we please make the X sound a tiny, little bit louder?" 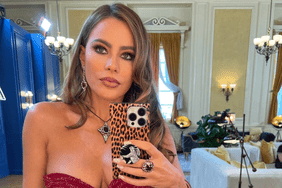