Have a Very Closer Christmas

While the two-hour special isn’t exactly filled with the same kind of holiday cheer as, say, A Very Brady Christmas, it does promise the kind of drama that Closer fans have come to expect from the Emmy-nominated series. There’s a bank robbery gone wrong, an RV cross-country road-trip with the Family Johnson and a slippery fugitive. It’s almost enough to make the Deputy Johnson utter the words “Bah, humbug!” Then again Sedgwick and her family (husband, actor Kevin Bacon, and two “practically grown” children) are “not big fans of the holiday.” “We always stay away and give each other one present and that’s the end of it,” Sedgwick said recently while promoting her upcoming special. So, where to this year? “We’re going to go work and be of service as a family somewhere, which will be fun and interesting.”

Lest you think she’s a total Scrooge, Sedgwick points out: “We used to like a Charlie Brown Christmas,” adding, “The no. 1 Christmas special that we always watch is The Grinch Who Stole Christmas. Really, the greatest thing ever.” –Caryn Midler 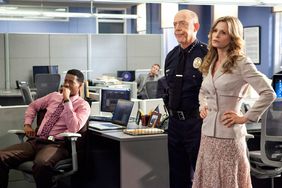 Kyra Sedgwick on How The Closer Changed TV for Women: 'People Wanted to Mimic' Our Success