It was another tumultuous day in Seattle. Derek was unraveling. Izzie was dying. Bailey and her mentor were fighting. Torres was avoiding and Hunt was running from Yang. And poor George still has nothing to do except be the butt of jokes and express single-line concern for his ex-lover.

Derek’s Dark Days: Still reeling from the death of his pregnant patient, Derek was depressed and missing work. He even refused to operate when the Chief came yelling, Meanwhile, Meredith had siblings who wanted proactive stomach removals to avoid the aggressive cancer that killed their family. The brother refused to bend to his sister’s will and declined the procedure, but big sis told Mer that she wouldn’t stop nagging — “You don’t leave the you love alone,” she said — and it rang true to Mer’s situation with Der. The Chief went to Mer and asked for her help to get Der back. When she told him that sometimes want to be left alone, he blew the whistle on Der’s planned proposal.

Later, she found a drunk Der shacked up in his trailer and accused him of hiding. He explained that he wasn’t hiding — he was quitting. He said she should understand considering she “wrote the book on quitting, running, hiding.” When she admitted that she knew about the ring, he pulled it out and used it for batting practice.

Against All Odds: Working with the other interns on the patient X (Izzie’s) case, Lexie suggested a scan that lead to the discovery that fans have been waiting for. The diagnosis: metastatic melanoma with mets to the liver, brain and skin. The prognosis: grim (as in a few months or survival rate of 5 percent). Lexie and Izzie discussed what they would tell patient X and it boiled down to two choices — run away or face it. Izzie seemed energized to put up a fight and was about to come clean to Karev until he started gushing being called the resident to watch by Arizona and Hunt. Instead of telling him the truth, she kissed him. George sensed something and told her he was there for her, but she kept it from him as well, choosing to only confide in robot Yang.

Love Is All Around: Yang woke McAngry up and he unconsciously pushed her into a shelving unit. He then excused her from his rotation. She stood up to him by day’s end, telling him, “It’s going to take more than a bad dream to scare me off.” Lexie told McSteamy that she wanted to make their relationship work despite being a “one-woman wrecking ball who broke his penis, his hand, his friendships.” He gazed at her with his blue steel and sweetly said, “You think you broke me Little Grey? You’re the one who put me back together.” After embarrassing herself at the bar, Torres was hiding from her crush. She caught up to her in the elevator and Arizona invited Torres to dinner. Torres tried to play it cool at first, but eventually made plans for the next night.

Butting Heads: The Chief was still mad at Bailey’s decision to specialize in pediatrics and was making her pay for it. She tried to tell him his outburst was unacceptable and he just walked away, so she tattled on him to his wife. Adele came down to the hospital, demanded they go to a conference room, made him apologize and told them not to leave the room until they worked out their issues. –Carrie Bell 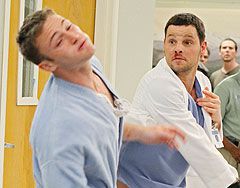 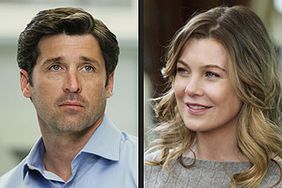 'Grey's' Goes Out with a Bang!