"To have all of that, it was just unlike any other experience I've ever had in my entire life, in my 47 years," T.R. Knight said of replaying his beloved TV character

Grey's Anatomy showrunner Krista Vernoff is sharing new details about her decision to bring back another beloved character to the show this season.

During Thursday's episode of the ABC medical drama, T.R. Knight made a shocking return while appearing in a dream sequence with Ellen Pompeo's character Meredith Grey as she continued to battle the novel coronavirus.

Knight's character, George O’Malley, was the first of the five original interns to leave the show in 2009. George died in the season 5 finale after sacrificing himself to save a woman from being hit by a bus.

In a recent interview with Deadline, Vernoff explained that George was her "first idea" when she first started thinking about having previous characters reappear on the show.

"When I called Ellen [Pompeo] and said, I have this idea to have you having these dreams on the beach, and I want to get someone amazing, like T.R,. Ellen was like, 'Yes, get T.R., and also Patrick.' That was the evolution of that," she explained. "Ellen and T.R. are close, and George and T.R. were both always favorites of mine, and so he was my first idea of, as a fan, who do I want to see again? I wanted to see George, so that’s where it started."

Vernoff said that her initial thought of having George come back to the show filled her with "joy," which she believes was "translated on screen" during Thursday's episode.

"I believe we have given many millions of fans that moment of pure joy. Right now in our lives, in this pandemic pure joy is rare, and so I’m so grateful to T.R. for coming and playing, and offering that to everyone, because I think it’s meaningful," she added.

As for Knight's reaction to coming back to the show, he said it was an experience "unlike any other."

"Going to the set that day, because we shot on the beach and it was an early call, I’m driving in the dark because you want to be early... It was just wave upon wave of happiness, of joy, of Krista. She was there the entire day. Linda Klein, she was there all day. And then to have Ellen, and Chandra, and Jim, of course, and all the other familiar faces that were there, too, because there were quite a bit of crew that were there still. To have all of that, it was just unlike any other experience I’ve ever had in my entire life, in my 47 years," he continued.

Similar to keeping the return of Derek Shepherd (Patrick Dempsey) under wraps, the majority of the cast was unaware that George would be coming back to set.

George was referred to as Thatcher (Meredith's father) in the script during table reads, and Vernoff said she thinks "there are members of the cast who still don’t know this is happening."

"I actually think, sincerely, most of the cast doesn’t know this is happening. We’ve been really, really, Ellen and I, joyfully Scorpio secretive," Vernoff added.

On Thursday, Knight, 47, expressed his love for his fan-favorite character and the Grey's cast on Instagram.

"George O'Malley will always claim my heart," Knight wrote. "Thank you to Ellen, Chandra, Jim, Krista, and all the familiar faces for once again sharing your beautiful light."

Later, he added a tribute to Pompeo and how much he loves the actress, 51, both as a scene partner and a friend.

"Ellen is the kind of actor I’m endlessly grateful to act with," he wrote. "She’s the embodiment of truth. George and Meredith love each other, for sure, but I don’t think he can hold a candle to love I have for Ellen."

"I’m so lucky to have a friend like you," Pompeo responded in the comments. 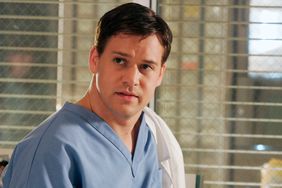