Seattle Grace was showdown central this week’s Grey’s Anatomy. There was no love between Alex and George or McSteamy and McDreamy. Izzie advocated for a big white wedding while Deredith were thinking small with Buffalo wings. Yang and Hunt weren’t talking and Torres‘s dad thought she needed straightening out.

The Wedding Planner: After finally getting engaged, Deredith started talking about their perfect wedding (no dress, no church, simplicity), but Meredith offered to let Izzie plan it to keep her mind off her cancer and she essentially turned her hospital room into a bridal boutique. Mer sent Derek in to rein her in, but he wimped out when she cried. Mer caved and tried on dresses while telling Izzie that she wanted simple. “It’s your day. You can’t just piss it away on a slip dress and a cheese tray from the grocery store,” Izzie whimpered. When she admitted to Yang that she was “just another patient trapped in dying body,” her friends played along with her wedding fantasy and found the perfect dress for Mer.

McSilent Treatment: Sloan and Der were still not talking and kept putting Lexie in the middle when they both had to attend to a patient. Der let it slip that the Chief would be his best man instead of Sloan and told Mer she should get over her grudge against him. She told him that she’d get over hers when he moved on from his. Their joint surgery was filled with more arguing and Sloan felt that he’d always be the Shepherd’s charity case. But when he solved a life-threatening bleed in seconds, Der had to admit to the patient’s wife that Sloan had saved his life. By the time they got home, all was right again.

Alpha Bales: Hunt went for therapy with Mer’s old shrink. Her pushing him to examine his survivor’s guilt ruffled his feathers and he took it out on Alex, who had left a suicidal man unsupervised and shrugged off George’s suggestion for a psych consult. The guy went missing which set off a parking lot fight between Alex and George that ended when the man threw himself out of the window. Hunt took notice of George’s quick-thinking and calm demeanor on the case and suggested he specialize in trauma. Hunt returned to the psychologist and admitted that he went for Yang despite knowing he was broken and he wound up wrecking her too. “I feel shameful for that,” he said. She called it progress because he had “to know what it is before he can navigate to somewhere better.” Meanwhile, Alex apologized to George and admitted that he was not good under pressure.

Daddy Issues: After Torres’s overprotective father threw Sloan and George against the wall for hurting her, Callie admitted that she’d started playing for the other team and introduced him to Arizona. He then decided that his daughter needed saving and planned for her to move home with him. Torres didn’t know how to stand up to a man that had done nothing but support her. Sloan wisely pointed out, “Supporting someone and respecting someone aren’t the same thing.” When she put her foot down, he delivered an ultimatum: come home or lose the trust fund. Instead, she cut him off for not accepting her for who she has become. — Carrie Bell

Tell Us: Did Torres do the right thing standing up to her father? Did you like the dress Mer settled on? Now that Der settled his grudge, do you think Mer and the Chief will be next to make up?Craig Sjodin/ABC 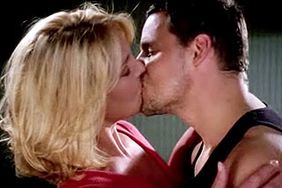 Grey's Anatomy Recap: It's All About Team Effort