"[Carlson] ignored it and tried not to encourage it and hoped it would end," Carlson's attorney Nancy Erika Smith tells PEOPLE. "It never ended. It, in fact, escalated and got worse over time "

On Wednesday, former Fox News anchor Gretchen Carlson filed suit against CEO Roger Ailes for sexual harassment. Now the journalist’s lawyers Nancy Erika Smith and Martin S. Hyman are speaking to PEOPLE about what it was that led to her demotion, why she was fired and just how Carlson is doing as she heads into legal battle they say has been “a long time coming.”

After Carlson, 50, was demoted from her role as co-host on Fox & Friends in 2013, she was put on a daytime show, The Real Story, which Smith says was a strategic plan to “lower her profile.”

“She was not invited to big events, she was not allowed to cover breaking news, she was not assigned to very important political events – they actually took her picture down from Fox News Studios,” Smith tells PEOPLE. “The goal was to lower her profile and then fire her.”

Adding, “In September 2015, [Ailes] said, ‘Have sex with me. You should’ve done it a long time ago. These problems are easier to solve.’ She rebuffed that and nine months later she was fired.”

Smith says that Ailes “engaged in sexual innuendo and banter, seeing if she would take the bate,” from the very beginning.

“She ignored it and tried not to encourage it and hoped it would end,” says Smith. “It never ended. It, in fact, escalated and got worse over time as you can see from the very specific complaints.”

However, a source close to the situation tells PEOPLE: “It was not a demotion and several anchors were vying of that spot,” while Ailes has responded in his own statement, in which he calls the allegations “retaliatory” and “offensive.”

According to papers obtained by PEOPLE, Carlson alleges Ailes asked “her to turn around so he could view her posterior,” commented on her body and wardrobe and once told her “she was ‘sexy,’ but ‘too much hard work.’ ”

After news of the suit broke, Carlson took to social media to express her thoughts on the matter.

“I have strived to empower women and girls throughout my entire career,” she said in the statement. “Although this was a difficult step to take, I had to stand up for myself and speak out for all women and the next generation of women in the workplace. I am extremely proud of my accomplishments at Fox News and for keeping our loyal viewers engaged and informed on events and news topics of the day.”

Ailes, 76, responded on Wednesday: “Gretchen Carlson’s allegations are false,” he said in a statement obtained by PEOPLE.

“This is a retaliatory suit for the network’s decision not to renew her contract, which was due to the fact that her disappointingly low ratings were dragging down the afternoon lineup. When Fox News did not commence any negotiations to renew her contract, Ms. Carlson became aware that her career with the network was likely over and conveniently began to pursue a lawsuit.”

He concluded his statement: “Ironically, FOX News provided her with more on-air opportunities over her 11 year tenure than any other employer in the industry, for which she thanked me in her recent book. This defamatory lawsuit is not only offensive, it is wholly without merit and will be defended vigorously.”

Because Smith and Hyman say that Ailes is “known to be very vicious and retaliatory and to smear people who take him on,” they admit that this sexual harassment case was a bound to happen.

“It is a long time coming because it’s been a pattern of behavior that has escalated and gotten worse over time,” Smith explains.

In fact, Smith admits that they have been receiving inquiries from women around the country who claim they have been victims of sexual harassment by Ailes – including former Fox host Judith Regan, who was also fired and allegedly pressured by Ailes to keep certain information from federal investigators, according to the Huffington Post.

“We will probably be subpoenaing Judith Regan about her interaction with Roger Ailes,” says Smith. “We have reason to believe that she has some evidence that is relevant. In New Jersey and in New York, other victims of the same harasser are relevant and the jury can hear from them because we allege a pattern of behavior. We will vet and talk to all the other women who have reached out to us to see if they are willing – they seem to be because they’re reaching out to us – to testify about how Roger Ailes treated them.”

Though Carlson’s lawyers admit that she was nervous to pursue the case, they say she is receiving a lot of support.”

“It’s very, very encouraging because it took a lot of bravery to stand up to Roger Ailes,” says Smith.

Later adding, “She hopes that she can continue with her career in journalism. We are hoping that the tide is turning for women in all professions – including media and journalism – and that it won’t be like the old days where the woman is the one that has no career when this is over and the man goes on to have a great career.” 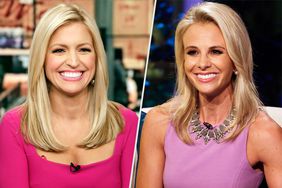