The "most famous gold miner on the planet," who starred in eight seasons of Discovery's Gold Rush, has partnered with Truly Social Games

Move over, HQ — cash prizes are out, and gold is in.

Todd Hoffman, 49, star of Discovery’s longstanding Gold Rush reality series, has amassed quite a bit of the precious metal — “more than $1 million and less than $5 million,” he says — and he’s ready to spread the wealth.

In a 90-day partnership with Truly Social Games that began July 9, Hoffman will be parsing out two ounces of gold each week, equaling about $2500, to players of the iPhone and Android app Planet Gold Rush. The prize will be mailed to each winner along with a T-shirt and letter of authenticity.

“This is raw gold right out of the ground that I dug out,” Hoffman tells PEOPLE. “It’s all weighed out and the gold is sent to them directly in a box.”

Truly Social Games CEO Cooper DuBois explains the excitement behind the idea: “It’s a visceral thing. You get gold in your hand and it’s heavy; people start rolling it around and looking at it. It’s quite the experience.”

Players can compete in the game’s daily tournaments an unlimited amount of times, with the highest-scoring contender receiving one eighth of an ounce of gold at the end of each day, and — provided they outplay the competition — one full ounce at the end of the week.

Hoffman, a father of two from Oregon, created Gold Rush in 2011, and it quickly became the highest-rated Friday program on cable television, according to Business Insider. However, after eight seasons racing through Alaska’s fall gold mining season, the reality star announced his departure from the series in February 2018 to start his own company, ZUM Media.

This partnership, he says, is a way to stay in touch with his most avid supporters and gold-mining geeks.

“[I’m doing this] to reach out, get some gold into people’s hands and meet the fans,” he says, adding that most people who see gold in the form of jewelry are rarely able to appreciate its unadulterated form. “Somebody went into the tunnel and got that gold. Most gold comes out of the ground in tiny pieces the size of a pinhead, and get a little bit bigger into nuggets.”

The miner, who’s no stranger to sharing his fortune (he bet 100 ounces of gold to charity in the previous season), has not determined an end-date to his collaboration with the game publisher. “It’s picking up steam, it’s pretty cool,” he says. “If everybody jumps on board then we’ll keep going and keep doing it.” 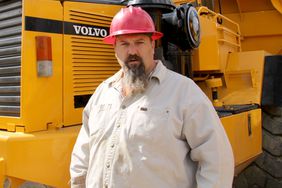