The couple tied the knot at the historic Oheka Castle in Long Island, New York

The actress and her fiancé, Adam Schmidt, tied the knot on Friday evening at the historic Oheka Castle in Long Island, New York, PEOPLE can exclusively confirm.

“I’m looking forward to continuing to grow in love together and to celebrate life to the fullest,” Panhilason told PEOPLE ahead of her wedding of marrying her entrepreneur beau.

“The vision for the wedding is to celebrate our beautiful story,” said Panhilason.

In honor of their Filipino and Spanish roots, the couple exchanged both traditional and personal vows in front of their 150 guests, which included her Girls Cruise costars Rozonda “Chilli” Thomas, Mya, Vena “Pretty Vee” Excell, B. Simone and Lil’ Kim, who served as maid of honor.

From Sadie & Christian to Justin & Hailey: All of the Celeb Couples Who’ve Tied the Knot in 2019

The bride and groom, along with their guests, then enjoyed a five-course meal at the reception, which Panhilason described as “whimsical, magical, romantic and elegant.” Attendees, also including Matt Sorum, Ace Harper, Gabrielle Dennis, AnnaLynne McCord and Jeannie Mai, were also served wedding cake that featured a 3-D scan of the couple.

For their special day, Schmidt wore custom Hugo Boss while his bride donned three dresses throughout the night.

“The wedding ceremony dress is custom Monique Lhuiller made of all hand-placed lace. The inspiration was Grace Kelly and Audrey Hepburn,” said Panhilason. “The reception dress is a custom Wona gown inspired by The Great Gatsby.”

When it came time to hit the dance floor, the star changed into a custom, high-slit Katie May dress, which was paired with a faux fur shawl by Project Runway: Junior‘s Matt Sarafa.

21 Celeb Couples Who Fell in Love at First Sight

The pair first met in 2017 when they exited the same building on opposite sides and crossed paths. Five minutes later, the couple wound up at the same Starbucks, where Panhilason accidentally stepped on Schmidt’s feet while standing in line.

After two years of dating, he popped the question on the couple’s anniversary during a trip to a vineyard after spending the night at the Chequit Hotel on Shelter Island, New York, PEOPLE announced in October.

With their wedding falling just 12 days before Christmas, the couple will be staying stateside for the holidays before embarking on a multiple-country adventure for their honeymoon.

“Right now, we will be in the States enjoying the holidays with family that came from all over the world,” said Panhilason. “Then we will have our honeymoon in the Maldives, Italy and Africa.” 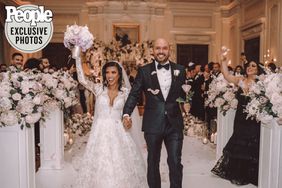