A classic boy band is coming to Fuller House

Fuller House has been reading the diaries of every ’90s girl.

The hit Netflix series will stage the ultimate throwback fantasy come true when it hosts the New Kids on the Block for an upcoming season 2 guest spot.

The boy band will cameo as themselves in the episode, as announced Thursday on Twitter via a photo of stars Jodie Sweetin, Andrea Barber and Candace Cameron Bure dressed in their NKOTB best.

On Thursday afternoon, Jordan Knight shared a snap of him and the band – including Danny Wood, Joey McIntyre and Jonathan Knight – on Instagram with the caption, “Let’s go!! #hangintougher on #fullerhouse !! #nkotb #netflix

It’s unclear whether Donnie Wahlberg will all appear – though fans will surely be hoping for a “full house,” so to speak.

According TVGuide.com, their appearance comes after Stephanie (Sweetin) and Kimmy (Barber) call in a favor to help surprise D.J. (Cameron Bure) on her birthday.

If they decide to perform, the girls might suggest they sing their 1988 hit “You Got It (The Right Stuff).” After all, as fans saw in season one episode of

RELATED VIDEO: How Was the Full House Set Recreated for the Netflix Comeback Series?

While NKOTB will be there, two people who probably won’t be seeing are Mary-Kate and Ashley Olsen – Sweetin recently revealed that the twins’ former costars have given up hope that they’ll make a return appearance.

In the words of Michelle Tanner, “Aw, nuts!” 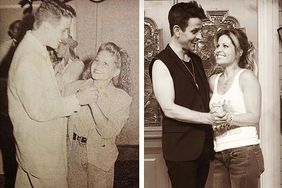