On Tuesday, Netflix released the final episodes of Fuller House

Though Lori Loughlin's character didn't appear in the second half of the fifth and final season of Fuller House, her whereabouts were finally revealed.

On Tuesday, Netflix released the last-ever episodes of the beloved show. In the episode titled "Be Yourself, Free Yourself," Uncle Jesse (John Stamos) mentioned his wife Becky (Loughlin) for the first time since the actress's arrest in March 2019 for her involvement in the nationwide college admissions scandal.

After attempting to turn a playdate into a sting operation to find out who bit his daughter Pamela, Jesse turned to niece D.J. Tanner (Candace Cameron Bure) for advice.

"You don't think you should run this by Aunt Becky first?" D.J. asked.

"Becky is in Nebraska helping out her mother," Jesse said. "I don't want to bother her with a tiny little thing like this."

"Right, because she'd tell you not to do what you're about to do," D.J. added.

Original cast members Bob Saget, Dave Coulier and Stamos also made appearances throughout the final episodes — ending with a triple wedding and a pregnancy announcement!

Netflix announced the fifth and final season of Fuller House in January 2019. The show was a reboot of the 80s-90s sitcom Full House, which featured widower Danny Tanner (Saget) raising three daughters with the help of his brother-in-law, Jesse Katsopolis (Stamos) and best friend, Joey Gladstone (Coulier).

Loughlin was featured in all four of the earlier Fuller House seasons but is now waiting for a judge to approve her plea deal in the nationwide college admissions scandal.

Speaking to PEOPLE Now recently, Barber, 43, called Loughlin “one of the sweetest, kindest and most down-to-earth people I’ve ever met” and said she was missed greatly while the cast taped the series finale.

“It was really sad, and we could feel her absence,” she said. “It just felt like there was a hole in the whole season but also in that final episode. She should’ve been there, and I’m sorry that she wasn’t.”

Stamos, 55, said he’d bite his tongue until Loughlin's trial but admitted in August that he felt as though the punishment was “not equal” to the crime.

“I gotta be careful. I want to wait until the trial happens… and then talk about it,” he told GQ. “I’ll tell you one thing that has been strange is: Honestly, I can’t figure it out. It doesn’t make sense. I talked to her the morning everything hit. I just can’t process it still.”

Stamos added, “Whatever happened, I’m pretty sure that the punishment is not equal to the crime, if there was a crime.” 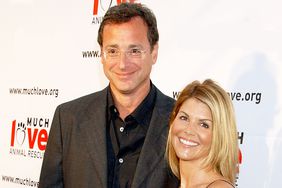