From July 17, 1989: Unlock your daughters. At 63, Hugh Hefner, the sultan of sex without $ strings, has succumbed to the charms of hearth, home and Kimberley Conrad, 26

The groom, graying at the temples, was resplendent in a black tux and silk bow tie. The bride, thank goodness, wore something – which is a darn sight more than she sported as Playboy‘s Miss January 1988 or again last month when she was unveiled as Playmate of the Year, 11 months after Hugh Hefner announced that she would become his mate for life.

Last week a happy Hefner, 63, beamed as his bride, 26-year-old Kimberley Conrad, wafted down a white-carpeted aisle on the lawn of his 36-room Gothic Holmby Hills, L.A., mansion to join him for their “I do’s”. Yet some of the 200 guests, breathing the scent of 10,000 long-stemmed white roses, couldn’t help but note the irony of it all. “Somebody ought to yell out, ‘Don’t you remember anything you said over the years?’ ” declared Bill Cosby, who regularly plays tennis at the mansion. “I can’t believe he’s doing it,” said James Caan. “The man could shake Canada, and a thousand beautiful girls would come tumbling his way.”

The self-styled Playboy of the Western World tying the connubial knot? Even the Reverend Charles Ara, who officiated at the nondenominational ceremony, seemed mildly amazed. At Hef’s “I do,” Ara blurted out to those gathered, “You heard him say that? Everybody out there – he said it!”

As recently as February of last year, the former boy vivant, who has touted Brobdingnagian breasts and free-floating fornication and proclaimed his own magazine “the single most important medium for the sexual revolution,” was still sounding unweddable. (His first marriage, to Millie Williams, ended in 1959 after 10 years and the births of Christie, now his 36-year-old heir- apparent, and David, 34, an L.A. computer programmer.) “There is probably nobody in America who has made it more publicly clear for the past 25 years that I do not plan on getting married again,” he said at that time.

But that was then – before the magical meeting with Conrad that “turned me around 180 degrees” on the subject, says Hef. An accomplished revisionist of his own lusty past, he adds, “You can’t say I haven’t been looking.”

“The major reason Hef decided to marry is that he fell in love with me,” says the young-enough-to-be-his-granddaughter Kimberley. “We’re both very much in love. And on top of that, we really, really like each other.”

It’s just coincidence, then, that this eleventh-hour walk down the aisle plays like a last hurrah for the fading Playboy phenomenon. It has been 36 years since Hefner, a onetime cartoonist, former Esquire copywriter and self- described victim of a repressed Methodist upbringing, founded the magazine that would blossom by 1980 into a $200 million industry – and inspire rabbit ears on everything from nighties to car air fresheners. Eventually, though, zipless airheads lost allure in the age of AIDS, freewheeling sex gave way to the rigors of commitment and harder-core porn claimed a share of the market. By the ’80s, the soft-focus monthly Playmates – as sanitized in their way as Breck girls – lay a-moldering on the page.

Today there is trouble in Bunnyland: Gone are Playboy’s movie projects, the casinos, the hotels – even Hef’s black DC-9 outfitted with an elliptical bed covered with Tasmanian possum skins. Last year the final Playboy key club closed its doors in Lansing, Mich. – forcing America’s last Bunny, known simply as Autumn, to fall back on her job as a security guard.

Hef has suffered personal setbacks as well. A stroke four years ago temporarily slurred his speech. Then four-year playmate Carrie Leigh slapped him with an acrimonious palimony suit for $35 million. (It was dropped in 1988.) Perhaps feeling mortality more than his oats, the aging hutchmeister began to change his tune, if not his trademark silk pajamas. “I’ve never been antimarriage,” he now says. “I’ve always been strongly pro-romance.”

Recent history proves as much. In May 1987, Hef met Conrad, an aspiring model raised in Vancouver, during a three-day photo test at the Holmby Hills mansion. She had filled out a questionnaire about her likes (blue jeans, midnight walks on the beach, G-strings) and her dislikes (gossip, pretentious people). “One time in the dining room,” she recalls, “Hef leaned over and said, “By the way, I looked at your data sheet. I think it’s wonderful.”

Last July 23, after a fervid night of Foosball, a tiny football, in the Game House (“It was a beautiful, romantic night,” Kimberley later recounted in Playboy. “I was in a wonderful mood, since I had won”), Hef stopped his intended by the wishing well. “Will you marry me?” he asked. “I thought about it for about two seconds,” reports Kimberley. “Then I said, ‘Of course I’ll marry you.’ ”

At the time, not everyone was enthralled with the match. “Isn’t she a little young for you?” chided Hef’s 93-year-old mother, Grace. “Mom,” replied Hef, “I’m too old to marry someone my own age. It’s too late.”

When Conrad was subsequently tapped as Playmate of the Year, she was shot in lacy white accessories. “It’s an honor she deserves,” said Hef at the time. “I can’t take it away from her just because we’ve fallen in love.” Along with the title, Conrad received $100,000 and a pearly white Porsche 911 Cabriolet – “without scoops or fins, a real lady’s car,” said the soon-to- be bride.

Hef and his intended signed a prenuptial agreement (terms undisclosed) shortly after he presented her with a 5.5-carat diamond engagement ring. Friends also staged a traditional bridal shower for Kimberley, though the groom took a pass on counterpart festivities. “I had a bachelor party for the past 30 years,” he said. “I don’t need another one now.”

After the hitchless 15-minute ceremony, 300 more guests (including Jessica Hahn, who arrived late) gathered for the reception, a stagy affair held in a Bavarian-style tent draped with 15,000 yards of white satin and decorated with nude female statues. After each course, a satin curtain was electronically lowered over the buffet table for a setting change: purple satin and orchids for the caviar course, red satin and gold braiding for the lamb and steak.

Among the guests was a parade of women who had been romanced by Hef in their 20s. Young girlfriends are “a way of holding on to that romantic stage in life, continually rediscovering,” he once said. “And I like the teacher- student aspects of it.” All the exes were gracious about the match. “I found a man who is better for me, but I’ll always love Hef,” said longtime girlfriend Barbi Benton, now the mother of two. “[Kimberley] looked beautiful,” offered Shannon Tweed, 1982’s Playmate of the Year, to which 1977 Playmate Sondra Theodore added, “I haven’t seen him this happy since I was with him.” The bride was unconcerned. “There’s nothing to be jealous of,” she says. “I’m the young one.”

Conrad also claims to be as much of a homebody as the reclusive Hef, sharing his taste for old movies, ham sandwiches, Cup O’Noodles and animals. (She has added six dogs to the menagerie of peacocks, flamingos and monkeys at Holmbly Hills.) Even before the wedding, it was clear a new day has dawned in Hefdom. Tired of seeing “people I don’t even know” at the breakfast table and gaggles of bare-breasted nymphets by the pool, Conrad has put a damper on the mansion’s traditional freewheeling fleshfest. “I want this to be more like a real home,” she says. “The girls still come over, but they’re wearing their bathing suits. I think that’s nice.” Adds Hef: “Wouldn’t it be unique if my life became a symbol of the conservative decade ahead, just as it was a symbol of the swinging ’60s and ’70s?”

Guests were left to ponder that possibility as the newlyweds departed for the romantic getaway of their dreams. After the bouquet and garter toss, Kimberley smiled radiantly and disclosed the honeymoon location. Beamed the new Mrs.Hefner: “We’re going upstairs.” 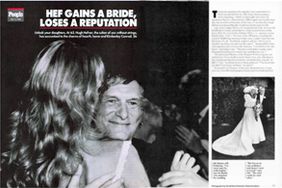