It was truly a rapper's delight at Bret Baier's Special Report Christmas party on Thursday night in Washington, D.C.

It was truly a rapper’s delight at Bret Baier‘s Special Report Christmas party on Thursday night in Washington, D.C.

Hip-hop group The Sugarhill Gang was on hand at The Dubliner to help the Fox News anchor celebrate the most wonderful time of the year, along with his 10-year anniversary as anchor of Special Report. Baier, 48, even decided to get on stage when Michael “Wonder Mike” Wright and Guy “Master Gee” O’Brien broke into their 1979 hit single “Rapper’s Delight” — and the chief political anchor knew every word.

“A great @specialreport Christmas Party last night with THE Sugarhill Gang & an off beat guest rapper in a Christmas suit,” Baier wrote on Instagram on Friday. “Merry and Happy!”

He also shared videos of the performance, and called the evening, “a great way to celebrate 10 years as anchor of Special Report.”

The Sugarhill Gang took a back seat when Baier hit his stride and kept up the energy as the father of two spit game on lines like, “And guess what, America, we love you!”

“Rapper’s Delight” was Sugarhill Gang’s biggest U.S. hit, although they went on to top the charts in Europe. The group lost its third member, Henry “Big Bank Hank” Jackson, to cancer in 2014. 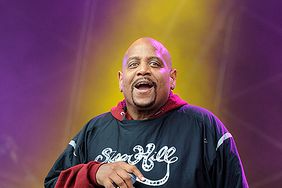 Big Bank Hank of The Sugarhill Gang Dies at 57