The Friends are reunited once again.

Looking better than ever, Jennifer Aniston is caught in a sneak peak from her guest spot on longtime pal Courteney Cox s ABC show Cougar Town.

The Switch actress, 41, plays a psychiatrist named Bonnie in the show s season 2 premiere on Sept. 22.

In new photos released from the set, Aniston is wearing her blonde-streaked long hair casual and wavy as she poses with a youthful-looking Cox. Aniston, a dog lover, is also shown sitting on a park bench with a little white dog. No hint of whether she’ll have any on-screen romance, though in real life she s been out recently with cast member Josh Hopkins. –Sara Hammel 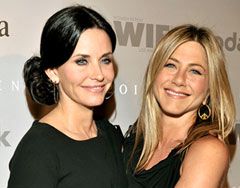