Our Favorite TV Couples Who Still Hang Out IRL

Seth and Summer, Cory and Topanga, Jim and Pam ... admit it, you still carry a torch for these iconic TV couples

Adam Brody and Rachel Bilson would've won Best Couple in our high school yearbook for their roles as Seth and Summer. Seth loved Summer from the very beginning, but it took her a little while to realize that she had feelings for nerdy Seth. There was no denying it after that recreation of the infamous Spider-Man kiss, though!

Bilson and Brody randomly bumped into each other at the airport in August 2019 and gave us all the feels. "Ran into my ol buddy from jfk to lax #californiaherewecome," Bilson captioned the photo of the pair. We still ship it!

Brian Austin Green and Tori Spelling played 90210's most enduring couple. From the first season to the last, the pair had their share of ups and downs, but their wedding vows made us weep.

They're back! Spelling and Green are reprising their roles (sort of) on the reboot, BH90210. Not gonna lie, we love seeing these two sharing the same screen again.

Nearly three decades years later, the pair are still close friends — Savage recently met Fishel's baby boy — and we got to see them play Cory and Topanga as parents when Disney aired Girl Meets World from 2014 to 2017.

These two could not be more different if they tried, but somehow they made it work. From a platonic friendship to Dwayne iconically crashing Whitley's wedding and stealing her for himself, Jasmine Guy and Kadeem Hardison made us root for this couple through thick and thin.

Guy and Hardison ended up reuniting on television in 2016 for a three-episode arc on K.C. Undercover. It's clear that the pair still work well together!

Zack & Kelly, Saved by the Bell

Zack Morris (played by Mark-Paul Gosselaar) may have had a reputation for being a bit of a player, but he always had his eye on the gorgeous Kelly Kapowski (Tiffani Thiessen). The on-screen couple eventually wed in a special episode, Saved by the Bell: Wedding in Las Vegas.

Both Thiessen and Gosselaar are happily married, and reunited in 2016 for an episode of Dinner with Tiffani, Thiessen's cooking show, with their respective spouses in tow.

She was the flashy girl from Flushing and he was her uppity boss, but there was no denying the chemistry between Fran Fine (played by Fran Drescher) and Maxwell Sheffield (Charles Shaughnessy). After seasons and seasons of will they/won't they, the pair married and had twins!

The show ran from 1993 to 1999, and Drescher believes that Fran and Maxwell getting together is what ruined the series. She said, "As much as you want the people to get together, as soon as they do, people start tuning out." Tune out?! We would never!

Joey (played by Katie Holmes) may have started the series hopelessly in love with Dawson (James Van Der Beek), but by the end it was Pacey (Joshua Jackson) whom she ended up with.

All grown up, it's clear that Pacey still loves Joey, as evidenced by this adorable photo from their Entertainment Weekly cover shoot.

Connie Britton and Kyle Chandler played the ultimate power couple on Friday Night Lights. With the ups and downs of marriage, coaching high school football and everything in between, the pair showed us what true love really looked like.

Oh my gosh, these two are just too cute, huh? Britton and Chandler bumped into each other at the 2016 Emmy Awards and could not have looked more ecstatic to see one another!

We love them and we like them! What started as a forbidden office romance between Leslie Knope and Ben Wyatt blossomed into one of the most adorable (and hilarious) relationships on television. Played by Amy Poehler and Adam Scott, it's no wonder these two still have us shipping this relationship.

The pair reunited for Wet Hot American Summer: 10 Years Later, but we would give anything to see them in their roles as Leslie and Ben just one more time.

From the start, it was clear that Luke and Lorelai (played by Scott Patterson and Lauren Graham) were meant to be. He fed her coffee addiction and she pretty much kept Luke's Diner in business.

We got to see Luke and Lorelai 10 years later in Gilmore Girls: A Year in the Life, in which they finally (finally) got married after living together for a decade.

He's her lobster! Played by David Schwimmer and Jennifer Aniston, these two spent 10 seasons playing with our emotions. But hey, if Ross and Rachel could make it through a "break," a drunken marriage in Vegas and an accidental baby, they deserve to be happy.

Though the cast of Friends repeatedly insists that there will be no reboot or reunion, we can't help but hope Ross and Rachel made it work after she got off the plane. The cast reunites often, so at least we get gems like these!

"They don't know that we know they know we know!" Monica and Chandler — played by Matthew Perry and Courteney Cox — made us all believe that it was possible to fall in love with your best friend.

Cox appeared on an episode of Perry's short-lived comedy series Go On in 2013 as a recent widow with whom Perry's character is set up.

From the start, it was clear that Jim and Pam would be the "it" couple of The Office. Even when Pam was engaged to Roy. It helped that Jenna Fischer and John Krasinksi were genuinely in love (well, sort of).

These two are constantly reuniting (this selfie is from 2016) and trolled each other on Twitter while rooting for opposing teams during the 2019 Stanley Cup. Krasinski even recruited David Denman (who played Pam's jilted fiancé Roy) to get in on the action. Today, both Fischer and Krasinski are happily married. 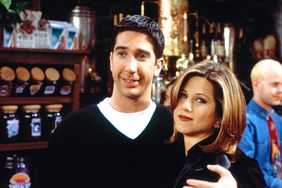