Is there love brewing between another Bachelor Nation member and Hollywood actress?

Eagle-eyed fans have theorized that season 21 leading man Nick Viall may be dating The O.C. and Hart of Dixie alumna Rachel Bilson, thanks to their social media activity.

]Bilson, 38 appeared on Viall’s podcast, The Viall Files, in July, and the two shared photos of each other on Instagram.

“Will we choose to forgo our individual rooms…,” Viall, 38, joked in his caption, which led Bilson to make a joke of her own in the comments: “He slid into her…dms #sheaccepted.”

In the months since, Viall has regularly written flirty comments on Bilson’s Instagrams, which has led fans to believe the reality star and the actress may be the real deal.

“Nice mountains,” Viall commented on Bilson’s Instagram post on Sunday. A few weeks prior, he wrote “nice foliage” of a photo of Bilson standing beside a plant, according to Cosmopolitan.

After Bilson shared a photo on Aug. 4 with her former Hart of Dixie costar Scott Porter, Viall complimented the actress on her attire, commenting “nice dress” on the photo.

Reps for Viall and Bilson did not immediately respond to PEOPLE’s request for comment.

While Viall and Bilson’s speculative relationship remains just that, fans seem more than happy with the romance they’ve potentially uncovered.

“Guys. I like the Rachel Bilson/Nick Viall flirting that’s going on and I 10/10 support it,” one fan tweeted.

Another Twitter user also pointed out that Bilson is not the only Hollywood star to be romantically connected to a Bachelor Nation member, citing Demi Lovato‘s online flirtations with Mike Johnson, Gigi Hadid’s outings with Tyler Cameron, and Sarah Hyland‘s engagement to Wells Adams.

Rachel Bilson Talks Dating as a Single Mom: ‘They Have to Be All About the Kid’

After his season of The Bachelor, Viall was engaged to winner Vanessa Grimaldi. The two split in August 2017, five months after his season 21 finale aired.

Bilson split from actorHayden Christensen in 2017 after nearly a decade together. The exes share daughter Briar Rose, who turns 5 next month.

While on Viall’s podcast, the actress said she hasn’t introduced her daughter to any potential suitors since her and Christensen’s split.

“I always put it out there,” the actress added, and described herself as single .“She’s my world and I talk about her all the time anyways. How f—ed up would it be if I hid that? … If you’re going to pursue something with someone, they have to be interested in the kid or be willing to be around the kid or babysit the kid … all the things.” 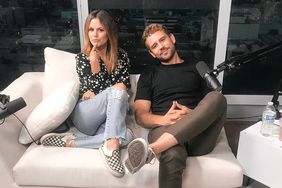 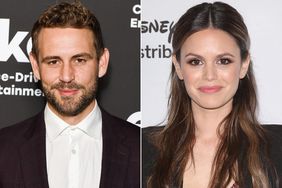 Nick Viall Confirms He 'Hung Out' with Rachel Bilson at Dinner: 'Her Friends Were There Too'