Alex Borstein's Divorce Is Final: Her Ex-Husband Gets Half Her 'Family Guy' Royalties

Alex Borstein and Jackson Douglas wed in 1999, and he filed for divorce in 2014

Alex Borstein's divorce from Jackson Douglas has been finalized.

According to court documents obtained by The Blast, Douglas, 47, and Borstein, 46, will equally share all residuals and royalties for work completed during their marriage. The couple wed in 1999, and Douglas filed for divorce in 2014. (According to TMZ, they did not have a prenuptial agreement in place.)

Borstein, who has voiced Lois Griffin on the animated Fox series Family Guy since 1998, makes $220,000 a month, according to the documents.

Borstein and Douglas, who played Jackson Belleville on Gilmore Girls, will split multiple bank accounts equally, with balances that total $5.2 million. They will continue to hold joint ownership over three accounts, and one account will go to their children: son Barnaby, 9, and daughter Henrietta, 5.

Neither side will pay the other any spousal or child support, according to the documents.

In terms of property, the two own three condominium units in a building in Pasadena. Borstein will receive two, and Douglas will receive one. Douglas will also receive a house in Washington state, and they will maintain "joint ownership" of an apartment in New York City worth $1.2 million.

The couple will split furniture, jewelry and art equally — except for a $25,000 custom built bar, which goes to Borstein.

In 2015, Borstein opened up about her divorce in an interview with the Huffington Post, quipping that the lesson she learned was "don't get married."

"You have to ride the highs and ride the lows," she continued. "To know when you've done all you can in something and ridden it to the end is important, too. To know, which is hard. It's hard to see that when you're in it, but maybe that's a good thing. You shouldn't see it immediately because then you do the work, and you work really, really hard for as long as you can." 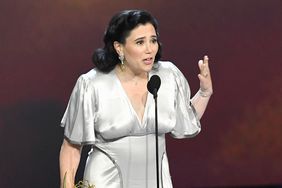