Everything to Know About Jeff Dye, the Comedian Seen Kissing Kristin Cavallari

Kristin Cavallari might have a new man in her life.

Over the weekend, the True Comfort cookbook author was seen kissing comedian Jeff Dye at a bar in Chicago in footage obtained by TMZ. This is the first time Cavallari, 33, has been linked to someone new amid her divorce from former NFL star Jay Cutler.

Recently, The Hills alumna told PEOPLE exclusively that she wasn't ready to date.

"I'm not interested in anybody right now. I'm happy. I just got out of a 10-year relationship," she said in September. "I don't really want to put energy into anything else right now, other than my kids and Uncommon James and my friends."

But has Dye, 37, changed her mind? Read on for everything to know about the comedian.

1. He has made numerous television appearances.

According to the comic's IMDB page, Dye was a finalist on the sixth season of Last Comic Standing in 2008. Following his time on the NBC series, he went on to guest star on ABC's Extreme Makeover: Home Edition, before he was also featured on a more recent episode of FOX's The Masked Singer as a guest panelist.

Dye is the owner of an adorable Goldendoodle pup named Bub, whom he loves to take with him everywhere and show off on Instagram.

Described by Dye as "the most loyal lil dude" he has ever known, the comic has also said that his canine companion has kept him company during the coronavirus pandemic. "Thanks for being my best friend during all this," he wrote in one Instagram post. "I love you Bub."

3. He's joked about wanting to date women with children.

Cavallari’s new flame joked about liking women with children in a July Instagram post, sharing a sneak peek at one of his standup routines on Instagram. The reality star is mom to three children: sons Camden, 8, and Jaxon, 6, and daughter Saylor, 4.

"I like dating women who have kids because they're already going to all the places I was gonna go. They'll tell me their day like 'we are getting breakfast, going to the water park, then getting ice cream.' I'm like me too! Shot gun!" Dye wrote.

4. He hosts his own podcast.

Since 2018, Dye has hosted Jeff Dye's Friendship Podcast, where he interviews guests such as celebrities, athletes and even Uber drivers.

5. He was previously linked to a WWE wrestler.

Back in 2018, Dye dated WWE superstar Becky Lynch for some time, according to Distractify.

The pair then split, before Lynch was spotted with fellow wrestler Seth Rollins in May 2019, per BleacherReport.com. Lynch later announced her engagement to Rollins in a tweet in August 2019. 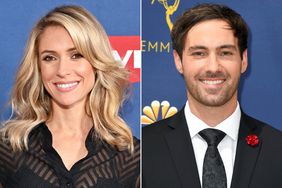