Bryshere Gray was sentenced to spend 10 days in an Arizona county jail after pleading guilty to assaulting his wife.

The Empire actor, 27, entered a guilty plea to the charge of aggravated assault in February, about seven months after he was first arrested for strangling his wife, according to court documents obtained by PEOPLE.

The other related charges against him, including aggravated assault with a deadly weapon and kidnapping, were dropped, per his plea agreement.

In addition to his 10-day jail stay, Gray will have to complete three years of probation with various conditions, documents from his March 31 sentencing hearing show. He was ordered to not drink any alcohol for the duration of his probation and to not have any contact with the victim in any form, unless approved by the Adult Probation Department in Arizona.

He must also pay restitution to the victim and participate in a domestic violence offender treatment program.

Reps for Gray did not immediately respond to PEOPLE's request for comment.

Police responded to a 911 call around 10:15 p.m. the previous night "that an adult female victim had been allegedly assaulted at her Goodyear home by her husband, who she identified as Bryshere Gray, an actor on the TV series Empire," according to a press release by the Goodyear Police Department.

The woman was "treated and released for her non-life-threatening injuries," police said at the time.

Gray's wife allegedly had "numerous visible injuries on her body and also stated that she was strangled at one point by Gray and temporarily lost consciousness," according to another release obtained by ABC15 reporter Zach Crenshaw.

Gray was later taken into custody after allegedly initially refusing to come out of his residence and speak with officers. He was ultimately arrested "without incident," police said. 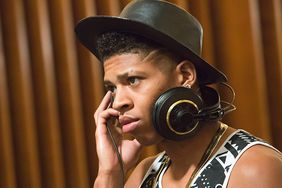