Carrie Fisher and her mother, Hollywood legend Debbie Reynolds were the subjects of Bright Lights, which received two Emmy nominations

Carrie Fisher, Mary Tyler Moore and Adam West were among the stars we lost this year who were honored at the 69th Primetime Emmy Awards on Sunday.

Viola Davis introduced the touching tribute, remembering such stars as Glen Campbell and Jerry Lewis before a slideshow of names were honored.

“From a rhinestone cowboy to a king of comedy, we also said goodbye to the people who created the shows we loved,” Davis said.

Fisher received a posthumous Emmy nomination for her work in the Amazon romantic comedy series Catastrophe, after her death following a heart attack in December. She was 60.

The actress and her mother, Hollywood legend Debbie Reynolds —who died at 84 the day after Fisher — were also the subjects of Bright Lights, which received two Emmy nominations: one for exceptional merit in documentary filmmaking, and the other for outstanding directing for a nonfiction program.

The group of late icons included legends such as Powers Boothe, Erin Moran and Don Rickles.

The In Memoriam segment was accompanied by singer Christopher Jackson, who performed a beautiful and emotional rendition of Stevie Wonder’s ‘As.’ 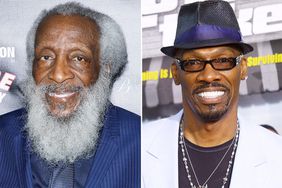