Emilia Clarke is officially a part of the Marvel Universe!

While appearing virtually on The Tonight Show Wednesday, the 34-year-old actress confirmed that she will star on a upcoming Disney+ series, titled Secret Invasion, for the popular franchise.

When asked by host Jimmy Fallon what she could reveal about the miniseries, Clarke said she was able to share the show's name, but not much else.

"I'm already scared," the Emmy winner said. "The first people I spoke to from Marvel were their security team and I am convinced that there is a man outside my house — there's been a car parked there for a long time — and I swear to God, he's undercover."

As Fallon, 46, pointed out that Marvel must've believed that Clarke would be "good at keeping secrets" given she had to do the same during her time starring on HBO's Game of Thrones, Clarke replied, "That's what I thought, but they schooled me. And so, I don't know what to do."

Secret Invasion is set to follow "a group of shape-shifting aliens who have been infiltrating Earth for years," per Variety.

Clarke joins a reported cast said to include Samuel L. Jackson, Ben Mendelsohn, Kingsley Ben-Adir and Olivia Colman, among others.

Jackson, 72, will reprise his role of Nick Fury, while Mendelsohn, 52, will once again play the Skrull Talos, a role he first portrayed in 2019's Captain Marvel.

In an interview with Comic Book last month, Clarke spoke about the new series, saying she was thrilled to join both the cast and the larger Marvel family.

"I just think what they're doing right now is so exciting and so cool, and so on the cutting edge of it. I feel like they're like the Apple of this world," she said of Marvel.

"To be part of that family feels like, 'Oh my god, I'm in the cool kid crowd. That's so cool.' Honestly speaking, the people that are making this are what pushed me over the line to really wanting to do it," Clarke continued. "I just think that everyone's heart and heads are in the right place with this one." 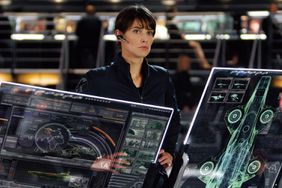