Ellen Pompeo Explains Why She Stuck with Grey's Anatomy: 'I Made a Decision to Make Money'

"I don't want to be out there chasing things, running after things, begging — I'd rather just see this as the blessing that it is," the actress said

For the past 15 years, Ellen Pompeo has been known to legions of fans as Meredith Grey on Grey's Anatomy — a role that has provided her with financial security, which the actress says has long been her priority.

In a new interview, Pompeo, 50, opened up about her decision to stick with the show, noting how important it has been for her to provide for her family. The star — who shares son Eli, 3, daughter Sienna, 5, and daughter Stella, 10, with husband Chris Ivery — revealed in 2018 that she had negotiated an annual paycheck of $20 million, making her one of the highest-paid actresses on TV.

"You know, I made choices to stay on the show," she explained on this week's episode of Spotify's Jemele Hill Is Unbothered podcast. "For me, personally, a healthy home life was more important than career. I didn't grow up with a particularly happy childhood. So the idea that I have this great husband and these three beautiful children [and] a happy home life was really something I needed to complete, to close the hole in my heart."

"And so I made a decision to make money, and not chase creative acting roles," she continued. "I don't like chasing anything ever, and acting to me, in my experience, was a lot of chasing. You've got to chase roles, you've got to beg for roles, you've got to convince people ... and although I produce and it's the same kind of thing, I think I still do it from a place of, I'm never that thirsty because I'm financially set." (In addition to making a reported $575,000 per episode, Pompeo also earns a producing fee on the Grey's spinoff, Station 19.)

Pompeo also noted that she didn't become a household name on the hit ABC medical drama until she was in her 30s.

"I knew coming up on 40, it's like, I don't want to be out there chasing things, running after things, begging," she continued. "I'd rather just see this as the blessing that it is."

And while the actress acknowledged "it's pretty common for actors to try to run away from stuff they're super well-known for," she said she embraces it.

"I understand that completely, but at my age and where my life is, I just try to lean into it," she said. "I'm not trying to run away from anything. It is who I am. I made my choices and I'm cool with it. And I actually have a real passion, which is to sort of start to talk about and break down systemic racism in the healthcare industry. This is something that has plagued us forever. And I think the show has given me a real window into that."

"That's a platform I'm very passionate about, and I'm going to continue down that path and try to do more work in that arena," she continued. "So Grey's has been a gift and I choose to see it that way."

Last year, Pompeo got brutally honest about her first decade working on Grey's Anatomy, admitting there were "many moments" in which she wanted to quit.

"The first 10 years we had serious culture issues, very bad behavior, really toxic work environment," she told Taraji P. Henson for Variety's Actors on Actors chat. "But once I started having kids, it became no longer about me. I need to provide for my family. At 40 years old, where am I ever going to get this kind of money? I need to take care of my kids. But after season 10, we had some big shifts in front of the camera, behind the camera."

Pompeo said she made it her mission to help turn the situation around.

"It became my goal to have an experience there that I could be happy and proud about, because we had so much turmoil for 10 years," she said. "My mission became, this can't be fantastic to the public and a disaster behind the scenes."

"We turned the culture around," she said. "I've hit some marks that have made me feel accomplished in a different way. [Creator] Shonda Rhimes has been amazing. She lets us be mothers. I don't have to travel. I don't have to go anywhere." 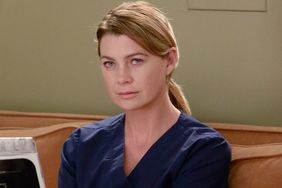