"As Caucasian people, it's our job, it's our task, it's our responsibility to make sure that we speak up in every single room we walk into," the star said

Ellen Pompeo is making a powerful plea for Hollywood to fix its lack of diversity.

In a conversation with Gina Rodriguez, Gabrielle Union and Emma Roberts for NET-A-PORTER, the Grey’s Anatomy leading lady opened up about why she believes Caucasian people should speak up about efforts to address homogeneity within the industry.

“I had a meeting with a director of another endorsement project that I’m doing,” Pompeo continued. “I said, ‘When I show up on set, I would like to see the crew look like the world that I walk around in every day.’ And I think it’s up to all productions to make sure that your crew looks like the world we see.”

“As Caucasian people, it’s our job, it’s our task, it’s our responsibility to make sure that we speak up in every single room we walk into, that this is not okay and that we can all do better,” she declared. “It’s our job because we’ve created the problem.”

Union also talked about the difficulty of advocating for change early in a career. “It wasn’t something that was lost on me, I just did not have the bravery to say it,” the Breaking In actress said. “There’s a part of me that felt lucky to be here. … I never, never would have thought to say it in this space because I don’t want to be appear ungrateful.”

“That’s why it is my job,” Pompeo answered. “That’s why I say we bear the burden … and I’m happy to take it on in any room at any time.”

In July 2016, Pompeo talked to PEOPLE about how her biracial daughters — 4-year-old Sienna May and 9-year-old Stella Luna — with husband Chris Ivery have led her to focus on representation.

“My daughters are black, so it’s very important to me that they see a lot of images of beautiful, powerful, strong black women,” she said.

“Every time there is a black woman on a magazine cover, whether it is Kerry Washington or whoever it is, I make sure that magazine is in my house and on my table,” Pompeo continued. “For me, that’s super important.” 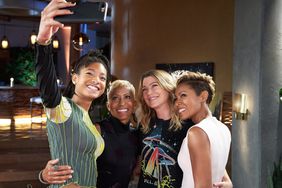 Ellen Pompeo on Fighting Racism and Getting Backlash for It: 'Why Can't I Help?'