It's not often that you can use the phrase, "Let's talk about the 500-pound gorilla in the room," and actually mean it.

Ellen DeGeneres and wife Portia de Rossi hosted “Gorillapalooza” on Saturday, an event that showcased performances by dancers and drummers and featured virtual reality “trekking” with mountain gorillas, all for a good cause.

The event held at the Hollywood Palladium initiated the fundraising arm of the The Ellen Fund, which supports global conservation efforts for endangered species and works toward the completion of The Ellen DeGeneres Campus of the Dian Fossey Gorilla Fund in Rwanda.

“I just want people to care,” de Rossi, 46, tells PEOPLE. “I guess that is all we want, for people to care, and realize what it means for humanity to have these magnificent creatures alive and well.”

“I tried to transform The Hollywood Palladium into an African jungle,” de Rossi says of the event curated by herself and DeGeneres. “I really wanted it to feel like the gorillas were there, because I really need people in their comfortable environments in Los Angeles to be transported to Rwanda and to really feel empathy and have a better understanding of what it is like to be surrounded by these extraordinary creatures.”

While a slated performance by Miley Cyrus had to be canceled due to the singer’s tonsillitis, Coldplay frontman, Chris Martin, stepped in at the last minute to do a five song set that started with a cover of The Monkees’ “I’m a Believer” and ended with an homage to Cyrus, as Martin covered, “Party in the U.S.A.”

The event itself ended up raising $5 million, partly due to DeGeneres, 51, and Late Late Show host James Corden tackling the live auction duties by themselves, which eventually led to guests Julia Roberts and Sofia Vergara engaging in a playful, yet expensive bidding war.

Th evening ended on yet another high note, with Bruno Mars bringing the crowd back to their feet with renditions of his signature hits “Uptown Funk,” “24K Magic” and “Just the Way You Are.”

Ellen DeGeneres Met Baby Archie During Visit with Meghan Markle and Reveals ‘He Looks Like Harry!’

Though when all was said and done, the money raised goes to a worthy cause, one shared with equal passion by DeGeneres and de Rossi, who have traveled to Rwanda three times to have incredibly close encounters with the endangered mountain gorillas.

“They almost kind of observe you, but don’t take you in that much,” de Rossi says. “It is one of those experiences that won’t ever leave you, just making eye contact with a Silverback and feeling so small, and that we are just a part of nature, and that we are not ‘everything’, that we’re not that important really.”

“It just feels humbling,” the actress and activist adds. “And it is just a very intensely human experience.” 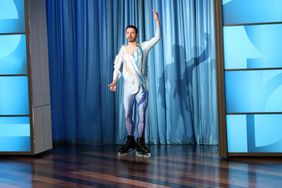 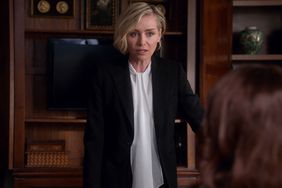 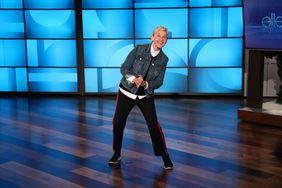