"It was just normal. It was never weird," Elizabeth Olsen said of growing up with Mary-Kate and Ashley Olsen as her older siblings

The Full House revival, which premiered in 2016 on Netflix and has since been renewed for a fourth season, features the majority of the original cast members — except for Mary-Kate and Ashley Olsen, who declined the invitation to return as their grownup character, Michelle Tanner.

Although the 31-year-old twin sisters have passed on the opportunity to star on the Netflix reboot, an idea arose that their lookalike younger sister, actress Elizabeth Olsen, could take on the role. But would she want it if offered?

On an episode of the podcast Everything Iconic with Danny Pellegrino, Elizabeth, 29, said she hasn’t seen any episodes of Fuller House and addressed previous reports that she could potentially play Michelle.

“That was weird, because it was also like, ‘Leave me out of this. This has nothing to do with me’ … a nd then I had to answer questions about it immediately after,” Elizabeth said.

“I was doing press, and I was like, ‘I don’t know what anyone’s talking about. Stop talking to me about this,’ ” she shared. “I’ve heard it’s a hit. … It’s very successful.”

Although Mary-Kate and Ashley are known globally, Elizabeth said “it was so normal” growing up with them the child tycoons her siblings.

“It was just normal. It was never weird,” she told Pellegrino.

“They’re brilliant and I love them,” she said. “If I didn’t feel that way maybe it would be annoying [to answer questions about them], but it’s really not that annoying.”

As for her favorite MK&A film, Elizabeth said, “Sleepover Party and then so is The Mystery Agencies or however that goes. And for their detective ones, I would say the Haunted Mansion because I’m in it.”

Last fall, series creator Jeff Franklin — who has since parted ways with the show — said it’s pretty unlikely that either of the Olsen twins will ever reprise their shared role on the beloved sitcom.

“Personally, I’ve given up asking them,” Franklin told TVLine. “The door is open, but I’m not going to be calling them anymore to invite them. They just don’t seem interested in coming.”

“It’s been three years of invitations, so they know the door is open,” he added. “It’s up to them to decide if they want to come play or not.”

Seasons 1 and 2 of the reboot alluded to Michelle’s absence, making several shoutouts to the twins, who took turns playing the youngest of Danny Tanner’s daughters.

Mary-Kate and Ashley are the only series regulars from the original Full House (which ran from 1987-95) who have not returned to visit the Tanner home. 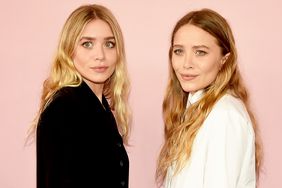 Aw, Nuts! 'Fuller House' Creator Has Officially 'Given Up' on Olsen Twins Appearance