Ed Swiderski’s up-and-down journeys on The Bachelorette and Bachelor Pad ended far short of the altar, but all that is behind him with his wedding Saturday night to Chicago TV anchor Natalie Bomke, the couple confirm exclusively to PEOPLE.

Swiderski, 36 – who proposed to Bachelorette Season 5 winner Jillian Harris in 2009 before their relationship derailed – said “I do” to Bomke, 33, in a sunset ceremony attended by 100 guests on the open-air veranda of The Crown on the 25th floor of the iconic Tribune Tower.

“I feel like the luckiest man on earth,” he tells PEOPLE.

The couple were engaged last fall, when he popped the question in the California redwood forest. They met after Swiderski, a tech entrepreneur and CEO of Klever, spotted Bomke, a reporter and anchor for FOX 32 News, on TV and introduced himself over Twitter.

The bride is the daughter of former Illinois state senator Larry Bomke, who escorted his daughter down the aisle to the sound of a single violin playing the Elvis Presley tune, “Can’t Help Falling in Love.” Her mother, Sally Jo Bomke, crafted the vases that were spray-painted silver and filled with ivory florals, roses, hydrangeas and baby’s breath and placed atop silver-sequined linens on tables at the cocktail reception, held at Howells & Hood on the tower’s first floor.

“My favorite part of the ceremony,” says wedding planner Susan Cordogan, of Big City Bride, who helped the couple plan the event, “was a playful surprise by the groom, who presented each mother with a long-stem red rose and popped the famous Bachelor question, ‘Will you accept this rose?'”

Along with mini-sliders and hot hors d’oeuvres, the pair also offered their guests speciality cocktails: an Amaretto Stone Sour that Bomke titled a “Swiderski Sour,” and a wine spritzer he titled “Risky Business.”

After swatting down infidelity allegations that helped sink his Bachelorette engagement to Harris, Swiderski went on a 2012 season of Bachelor Pad, emerging to proclaim himself at the time “100 percent single.”

Following the ceremony Saturday night, the newlyweds sat together at a “sweetheart table” backed by a homemade “Just Married” sign made by the bride’s mom, and celebrated with a three-tied cake decorated with a skyline cutout of their beloved Chicago.

Their first dance was to John Legend’s “All of Me.” 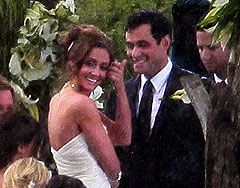 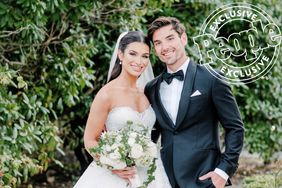 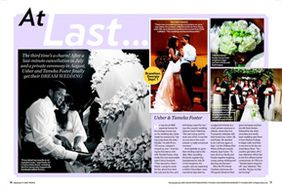