The celebrities hit the Dancing with the Stars ballroom on Monday to perform tributes to 1978's Grease, with special appearances from Olivia Newton-John and more

Grease is the word!

The celebrities returned to the Dancing with the Stars ballroom on Monday to perform routines honoring 1978's classic film Grease for the first time on the ABC competition series. Host Tyra Banks also shared a milestone, revealing she watched the movie for the first time only days earlier!

At the end of the night, Mel C and her pro partner Gleb Savchenko were eliminated from Season 30, after scoring 36 out of 40 for theirquickstep to "You're the One That I Want."

Prior to her dance, the Spice Girls member confessed to struggling with her confidence as she broke down into tears during rehearsal, telling Savchenko, "I feel like I don't trust where to go with it, do you know what I mean? And sometimes I get upset because I feel like you're really disappointed in me."

"I appreciate your vulnerability there because this whole thing is a journey, and as a judge, like, I'm not judging the vulnerability, but I love that you shared that," Carrie Ann Inaba later told her. "It makes us appreciate what you do out there even more, and that's the beauty of Dancing with the Stars."

Following her elimination, Mel C addressed the vulnerability that came with stepping outside of her comfort zone while speaking to reporters.

"I've always loved the show. I have always been a bit fearful of doing a show like this, and I think part of it is because, you know, you can be vulnerable, you know, and there can be quite an intrusion into your privacy," she explained. "We were filmed all day, every day, in rehearsals, and I'm not used to that environment. Well, probably not since the '90s, you know, being a Spice Girl and having cameras following us around everywhere. So that was a bit of a scary thing for me."

"But I think that the main thing is, I feel very proud of myself," she continued. "And I think because I had such high expectations of myself, and I felt like everybody else had very high expectations of me, so that put a lot pressure on me at times, each week. It was really, really difficult to go out there. And I've never danced to the best of my ability, but I did it, you know, I got up there and I did it, and I'm proud of myself for that."

"I'm 47, and I'm a very experienced performer, and it just goes to show you never stop learning, you know?" she added.

Meanwhile, Olivia Jade Giannulli and her pro partner Val Chmerkovskiy narrowly avoided being sent home after landing in the bottom two, following their foxtrot to "Summer Nights," which also earned 36 out of 40.

The pair received rave reviews from the judges, with Len Goodman saying, "Well, I think if Sandy and Danny were to dance a foxtrot, it would look a lot like that! It was full of fun, it was entertaining. Olivia, you are becoming one heck of a dancer, and Val, your choreography is just great."

Also during Monday's episode, Olivia Newton-John, who starred as Sandy Olsson in Grease, made a virtual guest appearance, along with costar Didi Conn, who played the role of Frenchy in the iconic musical.

Melora Hardin and pro partner Artem Chigvintsev earned 36 out 40 for their Viennese waltz to "Look at Me, I'm Sandra Dee."

"What I think sets you apart from everybody else is that every time you dance, it makes everybody want to do the dance with you," Inaba told The Office alum. "You make it look like it feels so good. Excellent job!"

Next, Iman Shumpert drew inspiration from his relationship with wife Teyana Taylor for his romantic Viennese waltz to "Hopelessly Devoted to You" with pro partner Daniella Karagach. The pair scored 28 out of 40.

"It had a gentleness that I liked so much," Goodman said of the performance. "The technique isn't great. The thing is, you try so hard that I find it difficult to criticize you. My mother used to say, 'Never knock a trier,' and you try so much."

Mike "The Miz" Mizanin and pro partner Witney Carson earned 32 out of 40 for their "Greased Lightnin'" jive, which he dedicated to his wife, Maryse.

"Usually every step is accounted for with you, but tonight it lost a little bit of the clarity, especially towards the end," Derek Hough said in his critique. "But, bro, that was so much fun."

"When it comes to beauty and legs, you have nothing to fear. In fact, you have plenty to spare," praised Bruno Tonioli. "I really felt like you stepped out of a dream into an enchanting Viennese waltz! Splendid!"

Suni Lee got 36 out of 40 for her Charleston to "Born to Hand Jive," which ended with a pie to the face for her pro partner Sasha Farber!

"I thought it was fantastic!" Inaba gushed. "I thought you did a great job. Just for you though, I want to keep pushing you, because I still think some of your movements could be a little more aggressive."

Cheryl Burke on DWTS Return After COVID: Felt Like 'There Was a Pillow on My Face as I Was Jiving'

"That had content, performance, storytelling, great choreography," Hough said of the routine. "That was a constant scene from the beginning to the end. That was the complete package. Well done, brother."

Kenya Moore — who was saved in last week's elimination — danced in honor of her grandmother, as she and pro partner Brandon Armstrong came back strong with 36 out of 40 for their rumba to "There Are Worse Things I Could Do."

"There wasn't much worse that you could have done in that rumba," Goodman told the Real Housewives star. "It had chemistry, it had a romance about it, it had control. It was really, really spot on."

Later, JoJo Siwa and pro partner Jenna Johnson achieved a 40 — the first perfect score of the season — for their the foxtrot to "Look at Me, I'm Sandra Dee (Reprise)."

"I am still shivering," Tonioli said of the performance. "Because I'm telling you what, that the most exquisite interpretation of the importance and power of friendship."

Cody Rigsby and pro partner Cheryl Burke closed out the night dancing the quickstep to "We Go Together" for 32 out of 40.

"Well, you needed a stronger frame, but I liked was the energy you produced," Goodman told the pair. "You really came out and gave it your all."

RELATED VIDEO: Kenya Moore Calls Low Score on DWTS a 'Gut Punch' and Says Her Best Dance Has Yet To Happen

Next week, the show will celebrate Halloween with a Horror Night-themed episode.

Dancing with the Stars airs Mondays at 8 p.m. on ABC. 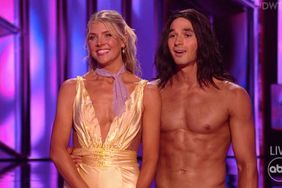 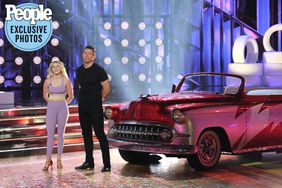