"Even though Jenna slipped we had the highest score of the night. That was insane," JoJo Siwa said of her week 1 scores despite her partner having a misstep

JoJo Siwa continues to get high marks on season 30 of Dancing with the Stars.

On Monday, Siwa, 18, and pro partner Jenna Johnson earned a 31 out of 40 for their cha cha to Lady Gaga and Ariana Grande's "Rain on Me." The score was one of the highest of the night alongside Amanda Kloots and Alan Bersten's foxtrot, which scored a 32 out of 40.

Despite Johnson's small slip during their performance in the premiere, the pair earned the top score.

"Last week being the first-ever same-sex couple on Dancing with the Stars made us feel so proud. Even though Jenna slipped we had the highest score of the night. That was insane," Siwa told the cameras during Monday's episode, which also showed Johnson visiting Siwa's colorful house for the first time.

"Making history and Top score of the night was literally a dream come true for me. Chase every dream you have and believe in yourself," Siwa, who publicly came out as LGBTQ in January on social media, shared in a celebratory post on Instagram after her DWTS debut.

Before her first dance, Siwa proudly talked about her history-making pairing.

"For the first time in Dancing with the Stars history, I am dancing with another female, and I'm really, really proud. I came out in early 2021 and what I love to do is make truly being who you are easier for kids," she told the cameras.

"This is a whole new ball game for me. I've never done anything ballroom before," Siwa added. "It's a learning experience that I'm more than ready for." 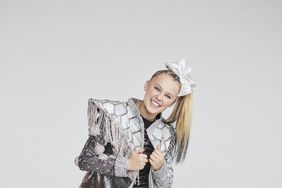 JoJo Siwa Has Gotten 'So Attached' to 'DWTS' Cast Ahead of Finale: 'Best 10 Weeks of My Life'