Sheen tells U.K. talk show host Graham Norton an anecdote about a run-in he had with the eventual presumptive Republican presidential nominee

Charlie Sheen is “really not” a fan of Donald Trump.

The actor reveals on The Graham Norton Show (which will be broadcast Friday night in the U.K.) that his distaste for the presumptive Republican presidential nominee has some basis in an encounter he had with Trump, 70, a few years back.

“I was once in a restaurant with my then-wife Brooke [Mueller], and he came up to me to say that he would like to give me a wedding gift,” Sheen recalls. “He took off his cufflinks, told me they were solid platinum and diamonds and insisted I have them.”

“Six months later, I was having some jewelry appraised and remembered the cufflinks. When the jeweler took a look she recoiled and said, ‘In their finest moment, they were cheap pewter and bad zirconia.’ “

“They had ‘Trump’ stamped on them,” continues Sheen. “I think that says a lot about the man.”

When the audience chuckles at the anecdote, Sheen asks rhetorically, “Now is that the laughter I can hear across the pond of people laughing at our country about this charlatan?”

Asked whether he believed the Republican front runner is heading for the White House, Sheen adds simply, “I have faith that good and decent people will make the right choice and the circus will leave town before it contaminates the Oval Office.”

Sheen’s episode of The Graham Norton Show will air in the U.S. next Thursday at 11:30 p.m. ET on BBC America. 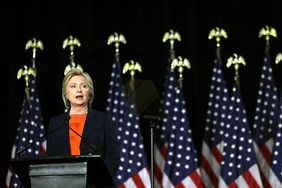