Catch up with the cast of the salacious ABC hit, 10 years after it signed off the air

Longoria was catapulted into superstardom when she scored a lead role in the ABC show, which lasted eight seasons. She starred as Gabrielle Solis, a former model-turned-housewife who begins an affair with her gardener — played by Jesse Metcalfe — when she grows frustrated in her marriage.

Following the end of Desperate Housewives, Longoria turned her sights to producing and directing — doing so on shows like Devious Maids, Jane the Virgin and Black-ish. In 2018, the actress welcomed son Santiago with husband José Bastón.

But leading a life behind the scenes doesn't mean the actress wouldn't flirt with the idea of a Desperate Housewives reboot. "Of course! Who wouldn't do it? I loved Gabby Solis. I miss Gabby Solis," Longoria told ET Canada when asked if she'd participate in a future reboot of the show that made her famous. "I would always love to be in Gabby's shoes again."

Huffman garnered critical acclaim for her performance as Lynette Scavo, winning an outstanding lead actress in a comedy Emmy in 2005, as well as an Oscar nod and Golden Globe win the following year for her portrayal of a transgender woman in Transamerica. Following the end of Desperate Housewives, the wife of Shameless actor William H. Macy — with whom she shares two daughters, Georgia and Sofia — earned praise for her performance in American Crime, which also earned her two Golden Globe nominations.

Her life changed forever when she was implicated in the college admissions scandal, pleading guilty in 2019 to paying disgraced admissions consultant Rick Singer $15,000 to have a proctor change daughter Sophia's SAT answers after she took the test.

On Sept. 13, 2019, the actress was sentenced to 14 days in federal prison, plus a $30,000 fine, 250 hours of community service and a year of supervised release. She completed her full sentence by October 2020, and one month later, was cast in her first post-scandal role.

In her first major TV role since Melrose Place, Cross played the part of Bree Weston — a thrice-married housewife who struggles with alcoholism on the show. Three years after the finale of Desperate Housewives — which earned the star Emmy and Golden Globe nominations — Cross returned to the small with a recurring role on Quantico. She has been married to husband Tom Mahoney since 2006, and they share twin daughters Eden and Savannah.

Earning a Golden Globe and Screen Actors Guild Award during the show's run, in real life Hatcher — who played Susan Mayer a.k.a. the emotional anchor of Desperate Housewives — is mom to daughter Emerson, with ex-husband Jon Tenney.

She recently reunited with on-screen love interest James Denton for Hallmark's movie A Kiss Before Christmas, revealing to fans she had a crush on him during the show's run.

"Mine wasn't innocent," Hatcher quipped, while Denton added, "The answer is yes [I had a crush on her], absolutely."

In the years since Housewives, she's appeared on a slew of TV shows including The Odd Couple and Supergirl.

As for how she feels about a potential reboot of the OG show? "I'd be the first person [to return]. I never wanted it to be over. I love those characters," she told ITV's Loose Women that same month.

In March 2018, Sheridan — who played fan-favorite Edie Britt, a rival of Hatcher's character, on Desperate Housewives — recently spoke of drama surrounding her dramatic exit from the show, claiming creator Marc Cherry killed off her character after she complained about a physical altercation involving the two.

"I was the victim of assault and battery on the set of Desperate Housewives by the creator of the show, my boss," Sheridan told Entertainment Weekly. "I reported him and was retaliated against for doing so and fired off the show. That is against the law." Sheridan filed a lawsuit in 2010, which was thrown out by a judge in 2017. She is currently working on appealing it.

Following her exit from the show, Sheridan retreated to her farm in Hidden Hills, California, to contemplate whether she wanted to leave the industry she'd been part of for decades. "What happened at the end of Desperate Housewives was degrading and demoralizing," Sheridan told EW. "It sent me under a rock. I really grappled with what happened, losing faith in people and really not trusting the business at all. I didn't know that I wanted anything to do with the business for some time."

While spending some time away from the business, Sheridan wrote and produced a few of her own projects with Hallmark. It wasn't until The CW offered her the role of Dynasty's notorious matriarch Alexis Carrington that she thought about making a return to series TV. "When Edie Britt died on Desperate Housewives, I feel like the audience felt like Nicollette died with her," she said. "And I thought [Dynasty] was such a splashy, fun, strong comeback. It was just the right thing at the right time." 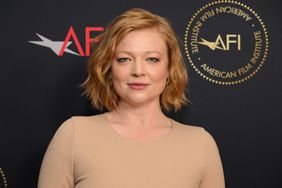