Edie became the narrator on last night’s Desperate Housewives as the entire neighborhood reacted to her sudden death. Soon everyone was gathered around Edie. Susan was first on the scene, bending down and whispering, “Don’t worry, you are going to be fine.” Well, actually she wasn’t, but she did go out in true Edie fashion — as the center of attention. Two days after her death, Susan, Lynette, Gaby, Bree, and Mrs. McClusky piled into Susan’s car with coffee, baked goods and an urn with Edie in it to deliver her to her son. It gave the Housewives the pretense of spending hours together and reminiscing about the Edie viewers never got to see.

Susan Susan remembered the first day she met Edie in the neighborhood. She was taking out the trash when Edie jogged by and saw her eating a donut out of a trash can. In the next week, they became instant friends, sharing gossip and jogs around the neighborhood… until Susan found out Edie was sleeping with a neighbor’s husband. Edie then told Susan that Karl was cheating on her with his secretary. That didn’t exactly thaw the friendship, but it sure did give DH fans insight into why Susan and Edie’s relationship was always so prickly. Lynette Lynette remembered how Edie had driven her to chemo one day, but instead of going right to the hospital, she took a detour and drove her to a biker bar. Edie tried to pick up Lynette’s flagging spirits, telling her, “Screw cancer, you are Lynette Scavo!”

Bree Bree remembered the time when she finally went to visit Orson in jail, but couldn’t go through with it — the place was too disgusting. She was about to turn her heels and leave (without seeing Orson) when the prison guard told her that Orson had another visitor anyway. It was none other than Edie, who paid weekly visits to Bree’s husband because she felt sorry for him. “I know what it is like to be exiled from suburbia,” she said. When Edie found out Bree didn’t visit Orson because jail was dirty and it was too humiliating for her, Edie told her to suck it up since he had gone to jail for her.

Gaby Gaby told a story about how she and Edie had gone out together right after she and Carlos had gotten divorced. They wound up at a club where Gaby was sent a drink immediately. This started a contest between the two women to see who could get more guys to buy them drinks in an hour. Gaby won, Edie left the bar with her cougar tail in defeat. When Gaby found her back at home, Edie confessed she was sad that her youth was slipping away. Gaby tried to convince her that in 50 years they would still be going out wearing heels that were too high and skirts that were too short.

They finally arrived at Beecher Academy, where Edie’s son went to school, to deliver her ashes. After being told she’d died, he admitted he was never close to Edie and she wasn’t a great mom. That’s when Mrs. McClusky told the story about how Edie had lost her son and that she really did love him.

In the end, the Housewives wound up taking Edie’s ashes right back to Wisteria Lane. They each decided to take some of Edie in smaller urns. They each said one word that best described Edie: “sexy,” “strong,” “beautiful.” Susan, however, needed 4 words: “one of a kind.” With that, they each scattered a part of Edie in their yards. –Liz Berman

Tell us: Will you miss Edie? Was it a fitting tribute to Nicollette Sheridan’s contribution to the show? And do you think she should get an Emmy nod? 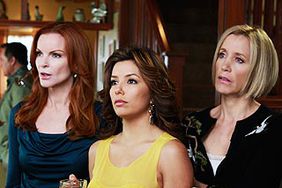 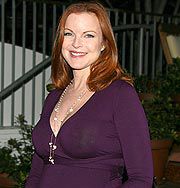 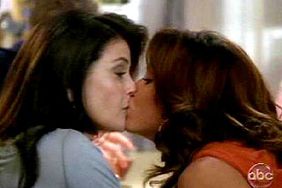 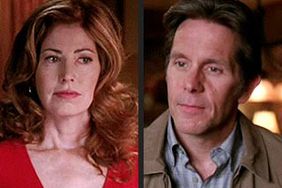 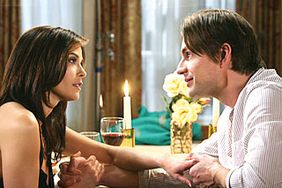 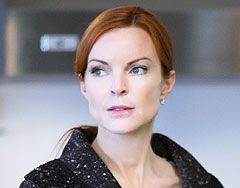