"Even a hooker deserves to have Thanksgiving dinner," Denise Richards said on The Real Housewives of Beverly Hills

Denise Richards says her ex-husband Charlie Sheen once brought a “hooker” to Thanksgiving dinner — and she was okay with it!

Richards, 48, recounted the bizarre story on Tuesday’s episode of Real Housewives of Beverly Hills, telling to her ex-boyfriend Patrick Muldoon that Sheen, 53, had aged her “terribly.”

Richards went on to reveal in a confessional that a few years ago, Sheen came over for Thanksgiving dinner — after the two had already split — and he had a “hooker” waiting for him in the driveway and was afraid to tell her.

That’s when Richards says she told him, “I’ll set a f— plate.”

“Even a hooker deserves to have Thanksgiving dinner,” Richards said while laughing during the confessional.

A rep for Sheen did not immediately respond to PEOPLE’s request for comment.

Richards and Sheen first met while shooting the movie Good Advice in 2000, but it wasn’t until Richards guest-starred on Sheen’s former sitcom Spin City in the fall of 2001 that a romance began to blossom.

Denise Richards Got Charlie Sheen’s Blessing to Appear on RHOBH: ‘I Respect His Opinion’

They married in June 2002. But by March 2005, it was over, with Richards filing for divorce while Sheen was in the midst of a drug and alcohol relapse (the actor was famously going on strange rants about tiger’s blood and “winning” at the time).

When Richards left Sheen, she was six months pregnant with daughter Lola, now 13. The former couple is also parents to daughter Sam, 14. Richards later went on to adopt daughter Eloise, 7, as a single mom in 2011.

Eventually through the years, she and Sheen — who is now sober — learned to build trust again.

Richards even invited Sheen to her summer wedding to new husband Aaron Phypers.

The actress married Phypers on Sept. 8, 2018, in an intimate outdoor ceremony held on a private Malibu estate overlooking the ocean. And though only a few close friends and family were in attendance, Richards made sure to extend an invite to Sheen.

“No matter what’s gone down with Charlie and I, I invite Charlie to anything having to do with the kids and I,” Richards told audiences on Real Housewives of Beverly Hills, which featured footage of the Wild Things star’s special day.

“Even if he did bring a prostitute as his date, I wouldn’t care,” she joked. “It’s just, it is what it is.” 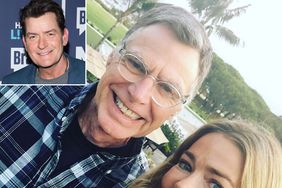