Dancing with the Stars pro Maksim Chmerkovskiy slipped off his dancing shoes earlier this week to give acting a try. Chmerkovskiy was at the New York set of All My Children to play — what else — a hunky dance instructor.

In the episode, which airs on Feb. 26, the women at Fusion Cosmetics, including Annie Laverly, played by Melissa Claire Egan (see photo), have been working long hours and want to take a break. They decide pole dancing will do the trick and they enlist the services of Chmerkovskiy, who shows up with three poles.

As a nudge, wink and nod to Dancing, former contestant Cameron Mathison (his Ryan Laverly character has amnesia) enters the dance studio and jumps in on the lesson.

No word yet on whether Chmerkovskiy will be back for Dancing‘s sixth season. Casting announcements will be made Feb. 18. The new season kicks off on March 17 on ABC. –Monica Rizzo 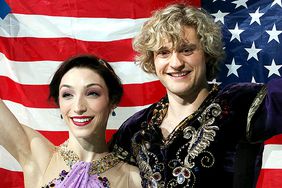