Calvin Johnson: 5 Things to Know About 'Dancing with the Stars' ' Newest NFL Contestant

The 30-year-old multimillionaire athlete will appear as one of the “contestant on season 23 of the ABC hit show Dancing with the Stars.

The Georgia native is partnered with veteran dancer Lindsay Arnold, who made it to the semifinals with Boyz II Men’s Wanya Morris in the spring.

Here’s what you need to know about the DWTS contestant as he prepares to ditch his football cleats in favor of some dancing shoes.

1. He played nine seasons with the NFL.
The Detroit Lions selected Johnson as the second pick overall in the 2007 Draft. Many thought he would be traded, but the Lions kept him, and he stayed for nearly a decade until he announced his retirement this past March. “I put a lot into the game and it’s taken a lot out of me, and that’s where I’m at right now,” Johnson told ESPN in June.

2. He signed a $132 million contract.
In 2012, Johnson signed an eight-year deal worth up to $132 million, which made him the highest paid receiver in the NFL at the time.

Lions teammate Roy Williams affectionately gave Johnson the nickname “Megatron” after the Transformers character – and for good reason: The athlete’s hands, much like the Decepticon Leader, are massive. Suffice it to say, the name stuck.

4. Megatron is a married man!
The pro footballer wed fiancée Brittney McNorton – who worked for the Lions front office – in June 2016 and invited all of his Lions pals to the wedding. On the newlyweds pricey gift registry? Themed Teenage Mutant Ninja Turtle movie home goods including a waste basket, shower curtain and lotion pump.

5. He a record holder.
Johnson retired with 731 receptions, 11,619 yards receiving and 83 touchdowns on his résumé – a franchise record. He also set the NFL’s single-season record for receiving yards with 1,964 in 2012. Here’s hoping his all-star tendencies transfer to the dance floor! 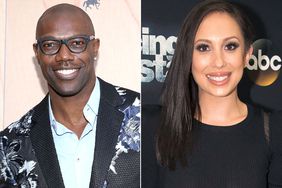 From Touchdown to Tango: Former Football Player Terrell Owens to Compete with Cheryl Burke on 'DWTS'