Even if Bindi Irwin doesn’t win season 21 of Dancing with the Stars, the young conservationist should still take home a nice paycheck.

According to contract obtained by PEOPLE, Irwin – the daughter of the late Crocodile Hunter star Steve Irwin – started the season with a base compensation of $125,000.

But there’s an issue.

Bindi’s mother Terri signed a form stating she gives up all rights to any money her daughter will make on the show, but a Los Angeles judge is asking for a similar form from Bindi’s father, according to TMZ.

The site states that it is not clear if the judge is unaware Steve died in 2006 or is simply asking for a death certificate.

Now, the production company behind DWTS is stepping in to move the contract through the court.

“We are aware of the situation and our legal team is in contact with the court to work it out,” a spokesperson for BBC Worldwide Productions tells PEOPLE.

Irwin will hit the ballroom floor again Monday (at 8 p.m. ET) on ABC. 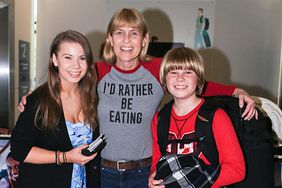