When your competitors are already earning near-perfect scores on a regular basis, the remaining pairs knew they had to strategize. The Woz attempted to impress us with The Worm; a cowboy saved his partner (and himself) from a potential dancing disaster; and the Olympian became a “bejeweled hummingbird,” flying to the top of the leader’s board in a three-way tie on Monday’s DWTS.

Denise Richards couldn’t break her serious demeanor and started the night on a flat note. Her samba lacked the necessary Latin kick and was “full of holes,” judge Bruno Tonioli said. “It was more waffle than samba. We’re going backwards.” Another star going backwards in week 3: a frustrated Holly Madison. Len Goodman didn’t spare the Girls Next Door star, telling her after her samba, “You’re like a match — hot on the top, wooden on the bottom.”

On the other hand, Chuck Wicks showed why he could be a possible contender in the competition with a foxtrot showcasing proper posture and comfort on the dancefloor. Once slammed by judges for letting partner Julianne Hough do all the work, the country singer was “finally in the driving seat,” Tonioli raved. They share a namesake, they’re both on the injured list and both had a very rough night. First up, Steve-O hurt his ankle during his foxtrot that started off on a high note but ended with the exhausted stuntman trying to catch his breath. The scorecards weren’t good news but the judges only had words of encouragement.

Fellow injury-prone contestant Steve Wozniak suffered a pulled hamstring during practice, but he wasn’t spared the judges’ harshest words or the lowest scores we’ve ever seen in recent memory. In typical Woz style, the computer whiz samba’d his way around the floor — even doing The Worm — with unconventional, uncoordinated moves that charmed the audience but failed to impress the judges. “On your knees and beg for forgiveness!” Tonioli exclaimed. “This was the worst I’ve ever seen. It was just bad.” He may find himself in the bottom two (once again) with a combined score of 10.

Lawrence Taylor gave up precious golf time to squeeze in some extra practice early in the morning. It paid off: the football champ not only had rhythm and “newfound confidence,” according to Inaba, but showed he could take on a more difficult number and challenge himself next week.

And climbing out of third place on the leader board, Shawn Johnson made her way to the top in a three-way tie with a lovely foxtrot that had the judges raving. “Oh my goodness, that was so great,” gushed Inaba. For Tonioli, watching the gymnast’s foxtrot “was like watching a bejeweled hummingbird!”

Adding a few more 9s to his own scorecard, Gilles Marini shook everything he got, and even dedicated his red-hot samba to Mom. The SATC actor made a “hard dance look easy,” Goodman noted. “You shook things I didn’t know guys could shake!” said Inaba. And while the Frenchman transformed into a Latin dancing pro, David Alan Grier went from comedian to Broadway star in a foxtrot that nailed most of the fundamentals … extension and turns. “I didn’t know you were like a Rockette!” Inaba said, giving him two thumbs up. Added Tonioli, “What a transformation!”

Melissa Rycroft once again looked at ease. “Your body moves with the music,” said Tonioli. “It’s almost like the music plays from your body. You must have a seventh sense!” Inaba noted the Bachelor star was an “excellent dancer” but “there’s something that’s lacking and I can’t quite put my finger on it,” she said as the audience voiced their disagreement.

Lil’ Kim used front-runners Gilles and Melissa as inspiration — it worked. The hip-hop artist scoring a pair of 8s for a sultry samba and “bionic booty” as described by (yes!) Goodman. While she may have upped her game, the week’s most improved honors went to Ty Murray, whose elegant and graceful foxtrot went uninterrupted even when partner Chelsie Hightower slipped. “That,” Goodman said, “I thought was fantastic … the whole thing. You’re a hero. It was just top notch.” Last week he was a butterfly transformed from a caterpillar. But this week? The rodeo champ is “a mini Fred Astaire!” Tonioli proclaimed. –Eunice Oh

Tell us: Do you think the judges were too hard on The Woz? Whose performance were you most impressed with last night? And who will land in the bottom two tonight?

MORE DWTS:• Monday’s Dancing: What You Didn’t See•Dancing Poll: Whose Samba Had the Most Sizzle?Craig Sjodin/ABC 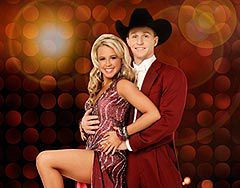 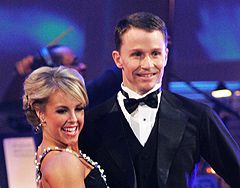 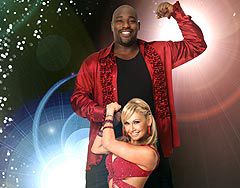 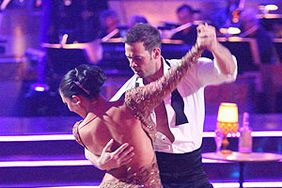