Clare Crawley is shying away from fan questions about her relationship status amid reports that she and Dale Moss are dating again after their split earlier this year.

During a Q&A on her Instagram Story Wednesday evening, the former Bachelorette received a comment from a fan reading, "How many of these are asking about your relationship status?"

"The majority," Crawley responded with a laugh before promptly changing the subject to her new ice maker.

Crawley, 40, and Moss, 29, called it quits in January, after they got engaged last summer, just two weeks into filming their season of The Bachelorette. Tayshia Adams then stepped in to replace Crawley for the remainder of the season.

However, the pair seem to have reconnected in recent weeks and have been spotted spending time together in New York City on several occasions. Last week, Moss appeared to make their reconciliation Instagram official, posting a mirror selfie with Crawley to his story. "Selfie skills on 💯," he wrote.

In March, a source close to the pair said they were not officially back together, but "working on things that went wrong in the past."

"Dale and Clare love and care for one another deeply, they always have and will," the source said. "They are giving their relationship the opportunity it deserves and working on things that went wrong in the past."

When he first announced the initial split, Moss wrote in a statement on social media, "We appreciate the love and support we've received from so many people, but this is the healthiest decision for both of us at this time."

Crawley broke her silence about the split days later, claiming she only learned about the split with his Instagram post. "Speaking for myself, my intentions with this relationship have always been very clear, so the truth is I am crushed," she wrote on Instagram.

A source told PEOPLE at the time that Moss did "have feelings for Clare" but he "wasn't ready for marriage and kids." 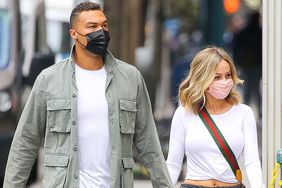