Cheryl Burke Teams Up with Nicole Scherzinger, Joe Jonas and Ciara for NBC's 'I Can Do That!'

Can Cheryl Burke do that? And what about Joe Jonas, or maybe Ciara?

That’s the question NBC will ask as part of its new variety show tentatively eyed for summer called I Can Do That! The network announced today that it has ordered six hour-long episodes of a new comedy variety series that will pit six celebrities against one another while they perform skills that they never knew they had.

Marlon Wayans will host the weekly competition, on which the former Dancing with the Stars pro Burke will join Jonas and Ciara, as well as Nicole Scherzinger, stand-up comedian Jeff Dye and actor Alan Ritchson (The Hunger Games: Catching Fire).

I Can Do That! was developed by an Israeli production company and is currently in production in more than 15 countries, including Italy, Brazil, Spain, Finland and Mexico.

“We’re excited to watch our all-star cast rise to the challenges ahead in such a fresh, new way,” said Paul Telegdy, NBC’s president of alternative programming. “Our viewers are going to fall in love with how these natural born entertainers push themselves outside of their comfort zones to put on a spectacular show every week.”

In December, PEOPLE announced exclusively that Burke was leaving Dancing with the Stars to join NBC. The contract for the two-time mirror ball winner expired after last season.

“I never thought I’d be able to walk away,” Burke told PEOPLE. “But after a decade of something, it’s time for me to move on and try something different, to be challenged, to feel inspired.”

“Dancing with the Stars will always be a part of my life,” she said. “Dancing is what I’ve done since I was a little girl. But it was very clear the show only wanted me back as a dancer. They weren’t interested in using me for other things and letting me grow.” 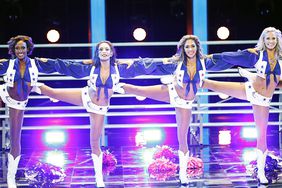 WATCH: Cheryl Burke and Nicole Scherzinger Shake It with the Dallas Cowboys Cheerleaders