Christopher Meloni left SVU after its 12th season, but has since reprised his original character for the spinoff, Organized Crime

Christopher Meloni is opening up about his exit from Law & Order: Special Victims Unit in 2011.

Meloni, 60, played Detective Elliot Stabler opposite Mariska Hargitay's Olivia Benson on the series, up until issues with his contract negotiation led to his abrupt departure after season 12.

In a recent interview with Men's Health, the actor said the show was not willing to give him the amount of money he was seeking to renew his contract. Meloni said he tried to negotiate the number of episodes he was in, but it ended up not working out.

"My thought was: Instead of 22 episodes, bring me back for nine episodes, or bring me back for 18 episodes. They literally came to me on a Thursday night and said, 'This is the deal. We want the answer by tomorrow. It's our way or no way,'" he said.

Meloni then recalled responding, "I don't want to f--- around with you guys. This is what I want. If you can't do it, that's fine. Let's figure out my exit."

Hargitay, 57, previously told PEOPLE about what it was like when Meloni first left SVU, noting that she was "devastated" at the time.

"I was just so sad, because we started this thing and built it together," she said in February. "And we went through so many milestones and spent so much time together and understood so many things that nobody else could understand."

Meloni, however, saw things differently. "She was left in the familiarity of what we were. And I'm sure there were echoes, constant reminders, everywhere. But for me, it was about how things fell out — and the word I'll use is that it was inelegant," he said.

"At the end of the day, how it was handled was, 'Okay, see you later.' So I went, 'That's fine. We're all big boys and girls here. See you later.' And I was off on new adventures and doing what I wanted to do. Telling the stories I wanted to tell," he added.

The star has since reprised his role as Stabler for the Law & Order spinoff, Organized Crime. The series premiered earlier this year and has been renewed for a second season.

"It felt good to have to make that decision — which was a big yes-or-no decision — with a sense of clarity and a sense of certain things being correct," Meloni told Men's Health of his return.

Christopher Meloni Talks Social Media's Obsession with His Butt: 'I'm Clever with My A-- Cheeks'

Elsewhere in the interview, he opened up about feeling bouts of anxiety when he first rose to fame on SVU.

"When my career started to happen, I could feel it," he said. "But I didn't want to trust it, because I had struggled for so long — or at least it felt like I'd struggled for so long — and I didn't want it to go away. I don't know how many people get this opportunity to dream a dream and have it come to fruition. Because everyone does the first part, but to have it come to fruition then starts a whole other journey of Now what? And What is this? And How do you manage?"

Now that he has his new show, though, Meloni said he's not as anxious.

"This time around with the Law & Order ride, I'm not stressed by: Will it go well? Will it not go well? Not that I know how it's going to go. Just that, eh, just ride. Just do, just be," he said. 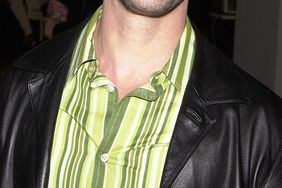