Though he was happy to have made it to the 5-year mark, the road hasn't always been easy

Though he was happy to have made it to the five-year mark, the road hasn’t always been easy.

“Over this time I’ve experienced more highs and lows than I sometimes thought I could take,” he wrote in his caption. “The passing of friends, family strife, life disappointments, fear, anxiety, envy, people-pleasing, fatigue, and ultimately, the birth of my beloved [1½-year-old twins] Ethan and Willow followed closely by the death of my beautiful father. Yet through it all, I stayed sober no matter what.”

“I felt every twinge, every splinter, every heartache,” he added. “It didn’t break me. I was present for my life and present for those in my life, and for that I am so grateful. Nothing changes if nothing changes. #ProgressNotPerfection.”

Back in 2014, Jackson talked to NBC New York about his battle, calling himself a “high-functioning alcoholic.”

“Practically nobody knew, not even my parents,” Jackson said, explaining that he hid his addiction from his loved ones. “I always showed up, I knew my lines, I looked okay. [But] I always felt like I was missing out. That’s why I drank and did drugs. I always felt like there was a party I hadn’t been to, or ‘Oh, where is everybody going now.’

This was especially hard for the out actor “in the gay community,” Jackson said, “where most of our interactions involve bars and parties.”

The idea of leaving that behind was hard for Jackson at first. “I thought, ‘Now my social life is over so what am I going to do?’ But I realized, I’m going to be more fun because I’ll do the same stuff but I’ll remember it. … I’ve been to every party, met everybody I wanted to meet and done everything I wanted to do. It’s time to just grow up and be accountable and have some integrity.”

“I had reached my highest level of potential with the way I was living,” he added. “I wanted more and I wasn’t going to get to the next level until I got up before noon; until I got up without having my foot on the floor so I wouldn’t have the spins.”

RELATED VIDEO: What Does It Take To Scare an American Horror Story Actor? Cheyenne Jackson Reveals All

Though just a year sober at the time, Jackson had said that he already felt more “clear.”

“I’m more open, I’m more free, I’m less scared, I’m less anxious,” he said. “I was so naive and self-centered before. I was in my own little actor land world where things were very myopic.”

Most importantly, “coming out again — coming out as an alcoholic — helped” Jackson added. 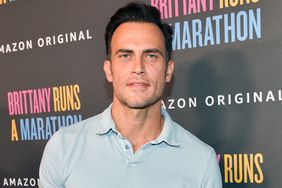 Cheyenne Jackson Says His Family Helped Him Stay Sober amid COVID-19: 'I Gotta Be Fully On'