These stars scored Emmy nominations — and a few wins! — for their brief but memorable turns as political figures on Saturday Night Live

The Saturday Night Live alum made history this year by being nominated twice in the same category for outstanding guest actress in a comedy series. One of those nominations is for her genius impression of senator and Democratic vice-presidential candidate Kamala Harris.

Pitt scored a nomination in the outstanding guest actor in a comedy series category for his three-minute portrayal of Dr. Anthony Fauci, the leader of the White House Coronavirus Task Force.

Fauci had mentioned specifically he would want the actor to portray him on SNL during a CNN interview. Then, after Pitt's portrayal, Fauci happily shared, "I think he did great. I mean, I'm a great fan of Brad Pitt and that's the reason why when people ask me who I would like to play me I mention Brad Pitt."

Fauci explained, "He's one of my favorite actors. I think he did a great job."

After portraying Donald Trump on the sketch comedy series, Baldwin took home the Emmy Award for outstanding supporting actor. The win meant that Trump, who was nominated before for his reality show The Apprentice, had never won an Emmy, but that someone impersonating him had. How meta!

"I suppose I should say, 'At long last, Mr. President, here is your Emmy,'" joked during his acceptance speech.

Tina Fey bore an uncanny resemblance to former Republican vice-presidential candidate, Sarah Palin, and her corresponding impression ("I can see Russia from my house!") nabbed her an Emmy Award.

Fey won the Emmy for outstanding guest actress in a comedy series for the spoof. She currently has nine Emmys and an impressive 45 nominations for everything from writing to acting to executive producing.

De Niro added some bushy eyebrows and prosthetics to portray Robert Mueller, the former FBI director and former special counsel for the U.S. Dept. of Justice. The transformation paid off when De Niro was nominated for his portrayal in 2019.

Technically McCarthy won in 2017 for her entire turn as host on Saturday Night Live, but a big part of that win was for her transformation into former White House Press Secretary Sean Spicer A.K.A. "Spicey."

McCarthy's ability to rant, rave and ride around on a motorized podium was worthy of every award, so we're glad she was recognized. 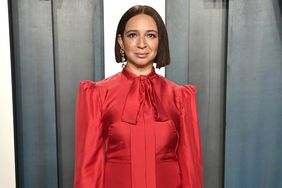