Cecily Strong Contemplates Her Future on 'Saturday Night Live' : 'Things Are a Bit More Up in the Air'

Cecily Strong first joined SNL as a featured player in 2012

Cecily Strong is unsure about her future at Saturday Night Live after nine seasons on the iconic sketch comedy series.

During a recent interview with Entertainment Tonight, the 37-year-old comedian discussed the season 46 finale earlier this month, during which she and her other longtime SNL stars, Aidy Bryant, Kate McKinnon and Kenan Thompson, delivered an emotional cold open alongside their fellow cast members.

"Things are a bit more up in the air and I'm okay with that," continued Strong. "My lesson from last year is sort of see what happens."

The actress first joined SNL as a featured player for season 38 in 2012. The following year, she began hosting the Weekend Update segment alongside Seth Meyers and later, Colin Jost, before Michael Che took over for her at the start of season 40.

Since then, she has remained on as a regular cast member and writer. In 2020, Strong earned her first Primetime Emmy Award nomination for outstanding supporting actress in a comedy series for her work on SNL.

Last week, her costar Pete Davidson expressed a similar sentiment about his own future on the show during an interview with Gold Derby.

RELATED VIDEO: Bowen Yang On Being the First Chinese American Cast Member on 'SNL:' "There's Some Humility That Has to Be Constant"

"Right now it's all up in the air," he said of starring in the upcoming 47th season. "I've got to talk to [executive producer Lorne Michaels] and see what the best move is, you know it's a big cast, there's a lot of new guys in there and there's a lot of great new talent that it's their time to shine."

Davidson, 27, added that regardless of whether or not he stays at SNL, he will continue working with Michaels and his production studio, Broadway Video.

"I have no idea what's going on right now but I do know that whatever it is I'll always work with Broadway Video and Lorne and a bunch of those guys because we're a family, we're like The Fast and the Furious — it's all about family over there," he joked. 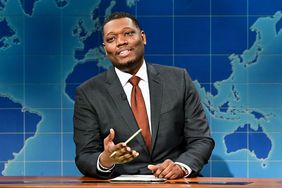