"I want to announce that today, The Talk, CBS and I have mutually agreed to part ways," Carrie Ann Inaba said on Friday

Carrie Ann Inaba is saying goodbye to The Talk.

After three seasons on the CBS daytime talk show, the host announced her exit on Friday in a "big announcement" shared to Instagram.

"I want to announce that today, The Talk, CBS and I have mutually agreed to part ways," she began her video message. "And I just want to say that I'm filled with gratitude for the experience and for this chapter of my life that has been The Talk. I have made lifelong friendships, I've had incredible experiences and I've had wonderful discussions that helped me evolve as a human being. And it's been an honor to be a part of your lives and to have a voice."

Inaba, 53, went on to give thanks and express gratitude for her past and present co-hosts, those who work behind-the-scenes on the show, and her fans. The current hosts include Sheryl Underwood, Amanda Kloots and Elaine Welteroth.

"I'm excited for all that's to come," she said. "So with love and gratitude and respect, I wish you guys the best. To a great season ahead and to all of you who have supported me through this time, thank you so much. It's been amazing."

She closed her message, "I'll see you very soon" — likely teasing her confirmed return as a judge for Dancing with the Stars' milestone season 30, premiering next month.

In the caption of her post, Inaba — who officially joined The Talk as a permanent co-host in 2019 when she filled Julie Chen's open slot — wrote that she is "filled with immense gratitude for my journey on @thetalkcbs."

"It has been a wonderful experience and an honor to have been the moderator at The Talk, following in the footsteps of two women I very much respect. @juliechenmoonves and @thesaragilbert. Dreams do come true, if you work hard for them," she continued.

Reflecting on her time, she said that she "made beautiful and lifelong friendships, I've had so many unforgettable experiences, (be prepared for a few memories shared in the next few days), and I've learned so much from all the heartfelt and authentic discussions we've shared with you."

Tyra Banks Wants Carrie Ann Inaba Back on DWTS Next Season: I'll Be 'Begging Her'

"My heart is full and content. I'm truly grateful for all that was, all that is (life is in perfection), and all that will be," said Inaba, who wished her "friends and family" at the series "a great season ahead!"

She concluded, "And, I also very much look forward to my own future as well. 💕✨🌅 Life is good. And endings can be as beautiful as beginnings. ✨For now, let's get the sequins shined up for @dancingabc Season 30! ✨," added Inaba, referencing the ABC reality dancing competition series.

In an official statement, first reported by Deadline and obtained by PEOPLE, Inaba said: "I enjoyed my time at The Talk as co-host and moderator and I am grateful for the opportunity I had to grow with the entire Talk family as well as truly connect with viewers on such a personal level."

She added: "I will miss The Talk, but I am excited for the next chapter both for myself and for the show."

Her exit from the series comes after she took a leave of absence from The Talk.

She announced the news of her step back in April to focus on health. (Inaba suffers from multiple chronic conditions, including lupus and fibromyalgia.)

"I wanted to let you know personally that I have decided to take a leave of absence from The Talk to focus on my wellbeing," she said in an Instagram video at the time. "I know you guys understand, health is the most important thing. So, I appreciate your support, I appreciate the love and support from The Talk family, and I hope to be back soon. Take care and I'll keep you updated. Thank you."

Inaba's departure also follows Sharon Osbourne's controversial exit from the show in March. Last month, Jerry O'Connell was announced as Osbourne's replacement; he will return to the show in his permanent co-hosting spot for season 12. 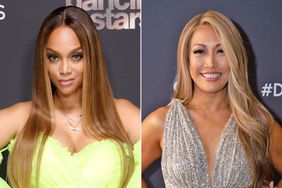 Tyra Banks Wants Carrie Ann Inaba Back on 'DWTS' Next Season: I'll Be 'Begging Her'