Though they are no longer the best of friends, Carole Radziwill is sending her love to Bethenny Frankel following the death of on-off boyfriend Dennis Shields.

“I just heard the sad news about Dennis. He was a good man. My condolences to all his family and friends. So tragic,” Radziwill, 54, tweeted.

Shields, who began dating Frankel, 47, in June 2016, was found dead of a suspected overdose in his Trump Tower apartment on Friday. He was 51.

Dennis Shields’ Wife Speaks Out About His Sudden Death: He ‘Will Always Be the Love of My Life’

Following Frankel’s divorce from ex-husband Jason Hoppy, with whom she shares 8-year-old daughter Bryn, the SkinnyGirl mogul sparked a relationship with Shields, who she had been friends with for nearly 30 years.

During the 2016 and 2017 seasons of RHONY, Radziwill was supportive of Frankel’s relationship with Shields. In addition, the author was there for her throughout the businesswoman’s contentious divorce battle.

However, in RHONY‘s tenth season, the former BFFs have had a very strained relationship, which Frankel has said made filming the show “challenging” for her. And in July, Radziwill announced her departure from the Bravo franchise after six seasons.

RHONY‘s Sonja Morgan also spoke out about Shields’ death, telling RadarOnline, “Dennis is her rock.Dennis was important to her, and her daughter. Another tragedy in her life. I’m so sad for her.” 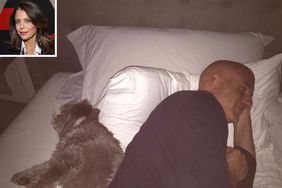