The actress, 45, shared a series of images on social media Friday that showed the TV father-daughter duo together off the screen in tribute of Saget — who died at the age of 65.

"Hug like Bob ♥️ I love you my sweet sweet Bobby daddy," she sweetly captioned her Instagram post alongside a photo of her receiving a hug from Saget during her 1996 wedding.

In addition to the post, the mother of three also shared several pictures of Saget on her Instagram story including him behind the camera, toasting at a meal, and smiling with the Full House cast.

Saget and Cameron Bure first met on the set of Full House in 1987. They played the father-daughter duo of Danny and DJ Tanner on the hit ABC sitcom and reprised their roles on the reboot Fuller House, which ran on Netflix from 2016-2020.

"Oh, Bob. Why'd you have to leave us so soon? We are all family, but you were the glue. The sticky, messy, squishy, sweet, lovable glue," she wrote alongside an image of her embracing Saget. "My childhood is wrapped up in you, my formative teenaged years and the rest of adulthood."

"You taught me to feel deeply at such a young age. You were never afraid or ashamed to share your emotions, to cry, to love, to laugh and say it out loud. We've always been so deeply connected since the day we met when I was 10 years old," she added. "You weren't just like a father, but one of my closest friends in life. This hurts like nothing I've ever felt before."

On Monday, she posted a joint message on her Instagram from the cast including John Stamos, Dave Coulier, Jodie Sweetin, Lori Loughlin, Andrea Barber and Scott Weinger as well as Mary-Kate and Ashley Olsen in memory of Saget.

"Thirty-five years ago, we came together as a TV family, but we became a real family. And now we grieve as a family," the statement read. "Bob made us laugh until we cried. Now our tears flow in sadness, but also with gratitude for all the beautiful memories of our sweet, kind, hilarious, cherished Bob."

"He was a brother to us guys, a father to us girls and a friend to all of us. Bob, we love you dearly. We ask in Bob's honor, hug the people you love. No one gave better hugs than Bob," the group's statement continued.

Saget was found dead Sunday at the Ritz-Carlton in Orlando, Florida, following his stand-up performance at the Ponte Vedra Concert Hall, outside of Jacksonville the previous night. 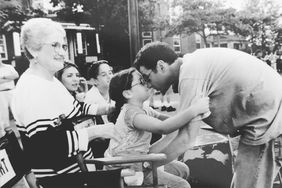