"Maybe I was just trying to be too cool or relevant in a Biblical way that didn't work," the Fuller House star said

The video, which has since been deleted from Instagram but still remains on TikTok, shows Bure lip-syncing to Lana Del Rey's "Jealous Girl," leaning in front of the camera and later holding up a Bible.

As the Fuller House star mouths the lyrics, "Baby, I'm a gangster too and it takes two to tango / You don't wanna dance with me, dance with me," a message written on top of the video says, "When they don't know the power of the Holy Spirit."

Addressing the backlash she received for the quick clip, Bure told her fans that it was not her "intention" for the video to be perceived as "weird" and "seductive," as many viewers deemed it to be.

"I just came home and read a lot of messages that were not happy with my latest Instagram post that was a TikTok video," Bure began. "And I usually don't apologize for these things, but a lot of you thought it was weird and I'm sorry. That was not my intention."

"I was using a very specific clip from TikTok and applying it to the power of the Holy Spirit, which is incredible," the actress continued. "So many of you thought I was trying to be seductive, which clearly means I'm not a very good actress because I was trying to be strong, not sexy. So I guess that didn't work, but I deleted it."

Bure then went on to explain that her daughter Natasha had previously crafted a similar clip on TikTok, which inspired her to do the same with a faith-based message.

"Maybe I was just trying to be too cool or relevant in a Biblical way that didn't work," she explained, shrugging her shoulders. "Anyway, most of you didn't like it, clearly, but there was a small percentage of you that appreciated what I did and understood my intention."

"But anyway, it's gone," Bure — who recently gained 5 million followers on Instagram — added, as she closed out her reflective messages, saying, "Now I know what you don't like."

While Bure remains open on social media, she has often commented on the toll online "haters" can take, saying she lets "a lot of" the criticism go, but also knows when it's time to stick up for herself.

"I do let a lot of it go — the majority — but when there's so many comments I think that's when you have to stand up for yourself," the star said. "So of course we can 'ignore the haters,' but when there are people that are making jokes thinking it's in good fun, they're not thinking they're being hateful, so I wouldn't call them haters."

"We have to realize and let people know that there's real people and feelings behind a computer screen or a phone," the actress added. "So I think standing up for yourself is always appropriate." 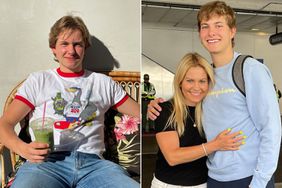