Bridget Moynahan Gushes About New Husband Andrew Frankel: 'He Really Is the Sweetest'

Bridget Moynahan and Andrew Frankel tied the knot in October

Bridget Moynahan‘s husband has nothing but praise to sing about her cooking skills.

During a Wednesday appearance on The Rachael Ray Show to promote her new cookbook, The Blue Bloods Cookbook, the actress said her husband Andrew Frankel loves anything she makes – though it might be because he doesn’t know his way around the kitchen himself.

“He’s the nicest guy ever,” the Blue Bloods star continued. “Genuine, kind and sensitive. He’s the best. He’ll eat basically anything and tell me it’s great.”

Moynahan also revealed that a lot of the recipes from her cookbook are inspired not only from her show, of course, but also from her family. She said she goes home and cooks for her brood every night – Wednesday is taco night, for example.

As for what kind of advice she has for anyone in the kitchen, Moynahan said she likes to stick to the basics: “Go with what you know. If something goes wrong, just roll with it. Don’t freak out.”

Though she said she likes “a clean salad,” the actress also revealed she’s also a “firm believer in more butter, more cream.”

Moynahan and Frankel, a New York businessman, wed Oct. 17 during an intimate celebration in the Hamptons. Guests first arrived at the vineyard for what they thought would be a harvest moon celebration but were in for a pleasant surprise when the couple revealed they had just tied the knot.

Event planners Ann David and Nicky Reinhard of David Reinhard Events told PEOPLE exclusively that the actual ceremony was small: “Only family [including Moynahan’s son John, 8, with ex Tom Brady] and a small number of close friends attended before the party.”

On Jenny McCarthy‘s Dirty Sexy Funny radio show Wednesday, Moynahan revealed that she and Frankel met after being set up by friends.

“He’s super easy to talk to, so it was like I was going out with somebody I knew for a lifetime,” she said.

Brady is now married to supermodel Gisele Bündchen, who recently admitted she considered leaving the football star after finding out Moynahan, his ex-girlfriend, was pregnant with his child in 2007.

“It was a challenging thing because here I am, you know, thinking, I’m dating this guy, we met, and we started dating and everything is great and then this happens,” Bündchen revealed during a Tuesday interview with Charlie Rose on CBS This Morning. “So, then I felt like I didn’t know what to do. It was kind of one of those moments of like, ‘Do I just run away?’ ”

“I think, now, eight years later, I couldn’t have asked for a sweeter bonus child,” the model said about John. 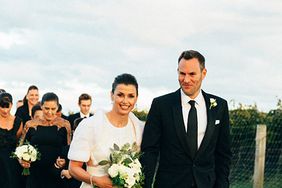