On Wednesday, the actress, 35, announced her engagement to Machine Gun Kelly, whom she's been dating for nearly two years.

As Fox moves into a new chapter of her relationship, a source tells PEOPLE that Green, 48, has no bad blood with his ex-wife.

"As long as they're both on the same page with the kids, he's good and happy for her," the source says, referencing the pair's three children, Journey River, 5, Bodhi Ransom, 7, and Noah Shannon, 9.

"They're strictly co-parents," the source adds. "He's got another woman that he's super into. He's entirely moved on."

Green — who is also dad to 19-year-old son Kassius — confirmed his split from Fox after nearly 10 years of marriage in May 2020. The former couple filed their divorce judgment on Oct. 15 and it will soon be finalized.

"We met at a coffee shop, then had a few dates and then we were locked in a house together," Burgess, 36, told PEOPLE in June of her love story with Green. "I was grateful for that because it allowed us to really take our time, and it was really awesome."

"I wasn't sure what that meant until the first time we kissed, and then it was the attraction and a whole bunch more. It was really cool," Green said. "And we really have the same moral compass."

In October, the couple celebrated their one-year anniversary, with Green writing on Instagram at the time, "1 year of accepting me in a way I've never been loved before #damnimlucky."

As for Fox, she and Kelly, 31, began dating in May 2020 after meeting on the set of the Randall Emmett-directed film Midnight in the Switchgrass.

Since then, the couple has been open about their intense love for one another. The announcement of their proposal was no exception, with Fox writing that they sealed the union by "drinking each other's blood."

On Thursday, a source close to Fox told PEOPLE that she is "thrilled" about her engagement and has been "ready to move on completely" from Green after reaching a "divorce agreement last fall."

"She has been wanting to get engaged," the source said. "Megan feels comfortable with everything. She is very happy and feels beyond blessed." 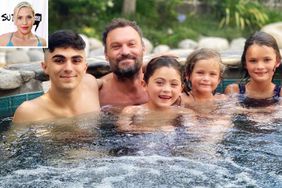