"I celebrate the anniversary as being on the good side of the dirt and surviving," the rocker tells PEOPLE

Wednesday night marked a significant milestone in Bret Michaels‘ life — and not just because he got unmasked as the bandana-loving Banana on The Masked Singer.

Ten years ago to the date, the Poison frontman, 57, survived a brain hemorrhage. “I’m having the brain hemorrhage at the exact same time that the show’s airing and I’m playing ‘Knockin’ on Heaven’s Door,'” Michaels tells PEOPLE. “This is the true irony in my life.”

When Michaels stepped out to give what he didn’t know then would be his penultimate Masked Singer performance as Banana (he sang “Brick House” in the Smackdown round against Kitty), the rocker got another flashback to 2010.

“They said, ‘We’ve got an awesome guest panelist. You’re going to love her.’ But they didn’t say who it was,” Michaels says. “Then I walk out and it’s Sharon [Osbourne]. I’m like, ‘Oh my God!’ We’re friends, we’ve done other shows together like Apprentice, we toured together.”

Michaels won The Celebrity Apprentice in May 2010, with Wednesday’s guest judge Osbourne, 67, coming in third place that season. “When we were doing Apprentice, her and I one day started laughing so hard they couldn’t even film us,” he recalls. “We both have the same sense of self-deprecating, sarcastic humor.”

Osbourne knew right away that Michaels, who faced off against Rhino in the first part of Wednesday’s episode, was under the fruit costume. “As soon as we finish, she goes, ‘Oh for God sakes, it’s Bret, stop it,’ ” the father of two says. “I was like, ‘Damn it, Sharon, have my back here!’ She just called it out instantly.”

Still, Michaels harbors no regrets about his time on the show and longs for the days when he can safely go back to performing for live audiences. He talks to PEOPLE about his reality TV run, staying busy while quarantining in California, and feeling more thankful than ever for medical staff and frontline workers amid the coronavirus pandemic.

Are you relieved your secret is finally out?
I didn’t want to exit ever! So I went in 1,000 percent. I’ve got Eric Stonestreet last season and this season, he’s going crazy on my phone. He’s like, “I know it’s you, just say it, just tell me. I need to know this. I’m in a serious bet right now.” I’m like, “I don’t know what you’re talking about. I love the show but I’m telling you I think it’s Brad Paisley or Darius Rucker.” You don’t know if you’re going to last until the finale or what date they’re ever going to air this, so how ironic is it that tonight is the 10th anniversary of the survival of my brain hemorrhage? This is the roses and thorns of my life.

How has your perspective changed since then?
I’m so grateful. I celebrate the anniversary as being on the good side of the dirt and surviving. I don’t ever celebrate the brain hemorrhage. But how ironic that it is literally 10 years to the moment when the show airs, it was airing at the exact time that they were operating at night on my brain. Who knew that this would all come full circle on April 22? On my kids’ life, my life, I had no idea that any of this would line up.

How is your health today?
I feel great. With being diabetic, insulin-dependent since the age of 6, I take it one day at a time. Thanks to all of our frontline fighters, our first responders, our doctors, nurses, everybody that is out there. I do it all the time, but just so they really know that I am truly grateful. Being a type 1 diabetic, I’m in the highest risk category there is [for COVID-19] and so just mentally staying positive and doing stuff on the property — the ranch here, or the house in L.A. — just staying positive and working on stuff. You’ve got to self-quarantine. I’m obeying all the guidelines and hoping that we return to normal both health-wise and economy-wise. We pulled all of our shows when we found out this was the real deal. I took it very seriously. Until they get a grip on it, we better all figure out a way to work together to stay healthy.

At least you got to have the Masked Singer experience before all of this started. As a seasoned performer though, why did you want to do the show?
I watch the show and loved it! The concept of the show is great because you’re mixing vocal and you’re mixing a crazy outfit. And I like to consider myself an amateur detective, and part of the whole detective work is I would get on there, me and my kids, and we try to figure this out. The first couple seasons we’re like, “Wait a minute, look at the size of the legs and the mask is making him look either taller than they are or less tall than they are.” So all of it is kind of surreal. Being diabetic since the age of 6, the biggest part of my battle sometimes has been mentally staying positive. And I think the show just had such a positive vibe to it. They’re not breaking you down, they’re literally taking different celebrities and they’re letting you come out and have fun. And I love that on top of the detective work.

Your daughters Raine, 19, and Jorja, 14, appeared undercover in an earlier clue package, so they must’ve kept your secret?
They did! They didn’t know until the show decided that that would be a good clue package and I said, “Are you sure? These are teenage girls! They are social media crazy.” With the internet, it’s about three taps on your phone and it’s over. I really give my daughters Raine and Jorja credit, they kept it under wraps and very few people have known.

You also talked in your clues about changing your image. Is that referring to when you got involved with reality TV?
It was just about taking what you are and what you started out as and staying relevant. In other words, branding and doing different stuff.

Did you ever think that on Celebrity Apprentice you’d be working for the future president of the United States?
Who knew, right?

Do you still keep in touch with any of the women from Rock of Love?
Most of them. They come out to shows, they have a great time. I like having fun with people and I like people being in my life. A lot of the girls have come out to shows and have gone on to other relationships, but we still stay close. Lacey [Sculls] just came out to my show in Las Vegas with her husband and we all had a great time.

Is there anything in your upcoming book, Bret Michaels: Auto-Scrap-Ography, that will surprise fans?
There’s a lot. I wanted this to be hands-on. And I let fans know I bet on myself. I held on to the publishing, never knowing if we were ever going to have a hit or not. Our records were independent records that went through a major distributor. The entire book is written in hand notes and then I matched the pictures to go with the stories and that’s why it’s called Auto-Scrap-Ography instead of autobiography. And there will be many volumes to follow.

Is there anything else you have coming up, or look forward to getting back to once we safely can?
I’m a pretty energetic banana! I cannot wait to go back out on the road when we are allowed and the guidelines are safe, as I am 1,000 percent in the highest risk category for this. I’m a hand-shaker and a hugger. I’m hoping that that light comes back around because the toughest part for me is just wanting to walk up and shake somebody’s hand and see how you’re doing. I know right now we can’t do that. I can’t wait to get back on the road. 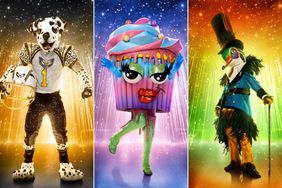 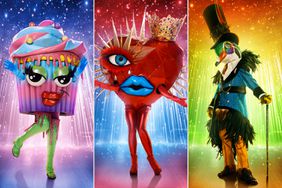 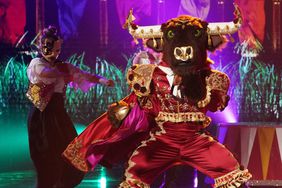 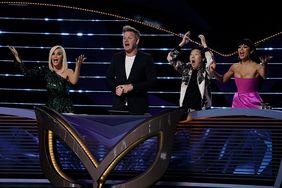 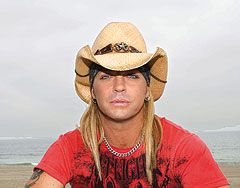 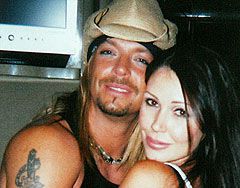 Bret Michaels: No, I'm Not Engaged, Thank You 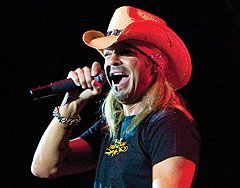