Bob Saget honored his late sister Gay in one of his final interviews before his death.

In 1994, the beloved comedian lost older sibling Gay to the autoimmune disease scleroderma. Last month, he spoke to CBS' Chief Medical correspondent Dr. Jon LaPook about the illness and his work with the Scleroderma Research Foundation.

"For me, it's an homage to her and somehow telling her that her life had a real purpose," Saget said of raising awareness for scleroderma in the interview, which aired Friday on CBS Mornings. "I have a lot to live up to. I feel like, to really do her justice, is to really make huge strides in the next decade or two and to really help these sweet, innocent victims with this disease."

Saget added, "My sister should not be dead. And that's one of the things that's kept me doing this, will keep me doing this until I'm gone. I'll do it when I am gone."

The Full House actor died suddenly on Jan. 9 — what would have been Gay's 75th birthday. His cause of death has not yet been revealed, though no signs of drug use or foul play were reported.

According to the Mayo Clinic, scleroderma is "a group of rare diseases that involve the hardening and tightening of the skin and connective tissues." More prevalent in women than men, it often occurs between the ages of 30 and 50, and there is not a cure. Severity varies, with some people seeing effects in their skin and others, in blood vessels, internal organs and the digestive tract, the Mayo Clinic shares.

Following Gay's death, Saget made it his mission to raise awareness and money for the disease, including creating the 1996 TV movie For Hope, a story of a woman with scleroderma (played by Dana Delany) loosely based on Gay's story.

He was also on the Scleroderma Research Foundation board and hosted the annual Cool Comedy, Hot Cuisine fundraiser, which combined stand-up from him and his famous friends with meals cooked by top chefs. To date, the event has raised $25 million toward research and treatment.

Elsewhere in his CBS Mornings interview, Saget noted how important comedy and humor were following the loss of Gay as well as his other sister Andrea, who died in 1985 of a brain aneurysm.

"It was a defense mechanism and it truly helped me survive," the America's Funniest Home Videos host said. "And it helped keep me mentally alive rather than letting it destroy me."

When speaking to NIH MedlinePlus Magazine in 2019, Saget emphasized the need to keep up hope for progress in scleroderma research. "There are new drugs specifically for scleroderma that are helping people," he said at the time. "But we have a long way to go to get to even more effective treatments and eventually a cure."

"I speak with and meet a lot of people with the condition," Saget added. "My word to them is don't give up hope, because we are making incredible progress." 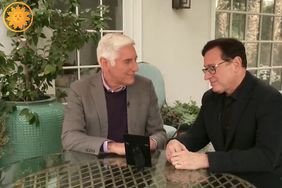